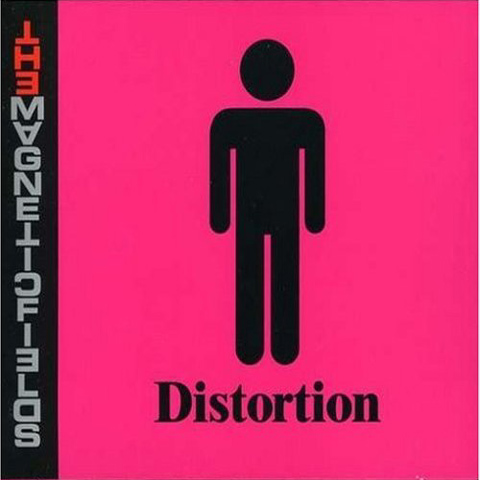 Hailing from New York City, singer-songwriter Stephen Merrit, returns to good form on the healthy, aptly labeled follow up to 2004’s i. Distortion, the Magnetic Field’s ninth studio album, is everything one should expect from a Jesus and the Mary Chain record. While that might sound snide and may be an over generalization, the raw, buzz saw noise that Merritt hums and bellows over sounds no different, at times, than “Just Like Honey”.

Distortion is proof that time is crucial and if a four year hiatus is what it takes to come back to form, then let Merritt be a recluse. The songs here are melodic, oozing with emotion and sarcasm (an expected blend from a ’90’s something songwriter, really) bearing a dirty underbelly that smells pretty at the top. I mentioned before that this album is aptly labeled, a statement I’d like to come back to.

“Three-Way” rips open the doors, with echoing and rather distant drumming, pardoning Merrit’s love for sixties soul-pop. “Free way,” he screams, as guitars crunch roughly and a piano scales something incessantly catchy. “California Girls” starts out fresh, but tires after the fourth or fifth calling of, “I hate California girls.” Despite the nagging lyrics (essentially a “Fuck you” to Paris Hilton & friends), the mood is quite sublime.

Let’s not forget this keeper: “Too Drunk To Dream” will become the new anthem for any college student who’s ever walked out of an English workshop, an impossible math test, or a statistics course and into the cold realization that they will never jump that hurdle. Depressing? Here’s a sample: “Sober, life is a prison/ Shitfaced, it is a blessing/ Sober, nobody wants you/ Shitfaced, they’re all undressing.” And that’s just the first few lines. It’s a song that Joe Strummer would have listened to.

Ironically, by shifting gears with sound, Merritt has only emblazoned the band as epic in creating moody, subversive music. “Xavier Says” is a strong puller, mirroring the band’s past ballad “Why I Cry”, while the cacophony of noise plays chaotically beneath the humorous lyrics in, “The Nun’s Litany.” Here’s a scant example of the clever lyricism, “I want to be a cobra dancer/ With Lil’ Willie between my thighs/ I may not find a cure for cancer/ But I’ll meet plenty of single guys.” Funny, right?

It’s the humor that sells this album. Merritt can still write a powerful song or two (in this case, he can write 13) and the band follows suit. It’s nothing we haven’t heard before musically. Hell, turn on Psychocandy, the Jesus and Mary Chain’s initial debut, and you’re bound to hear the similarities. Though to be fair, this sound is the Fields’ own now… providing an accurate portrayal of the madness and tumultuous cohesion of Merritt’s literary mind.