The Mars Volta – The Bedlam In Goliath 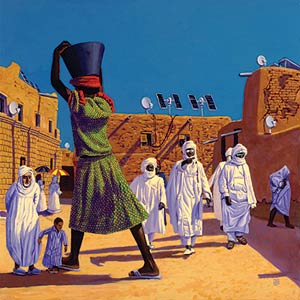 Plagued by demons, riddled with mechanical problems, and dipped in enough supernatural phenomena to pen the third Ghostbusters film, The Bedlam in Goliath is the proud (if not quasi-epic) name of The Mars Volta’s fourth incarnation. Sure, it sounds like a chapter in an H.P. Lovecraft compendium, but isn’t that fitting given the esoteric, ominous album artwork, provided by Jeff Jordan?

Since much of the album’s lyrical content has been said to deal with Cedric Bixler-Zavala’s channeling through a Ouija board he found in the Middle East, the overall mood mirrors this. Religious connotations, from burials to sacrifices and to the afterlife, spiral through the songs. This is an awkward disc, dishing out content that may be hard to swallow. However, this might be the first time the band is constructing something consciously linear since 2005’s Frances the Mute.

Opting for a quick start rather than a strict build up (a rarity for this band), “Aberinkula” cracks open the wicked tales in a twisted, scenic myriad of instrumental jargon layered with doubled vocals, seemingly in the foreground this time around. Bixler Zavala sounds terrific, bringing hooks over the deflated melodies that sunk 2006’s dead-in-the-water release, Amputechture. Hints of those Middle Eastern vibes appear here. The lyrics lend itself to foreshadowing as Bixler Zavala wails, “Have you seen the living/ tired of their own shells/ all the nonbelievers/ torso in the well.” It’s abstract, but given the band’s previous forte into lyricism, this stuff is at an eighth grade reading level.

“Metatron” is a speedier number. Punchy drum beats and shattering cymbals from newcomer Thomas Pridgen (he’s 24!) offer a stable wall for guitarist-composer Omar Rodriguez-Lopez to spray paint over, something he’s known for. Clocking in at just over eight minutes, the song manages to speed up, slow down,take a few breathers, but kick back enough energy to retain some consistency for what is essentially a fast-paced album.

Everyone’s familiar by now with the current single, “Wax Simulcara”, a song that probably takes some getting used to, but the chorus will somehow find its way into the daily jive of things. It’s no “The Widow” or even “Intertiatic E.S.P.”, but it’ll certainly do. These aren’t simple songs anymore. Going a step further, this isn’t the same band anymore. This is a band on the same ledge that gave way to authors Arthur C. Clarke or Philip K. Dick, finding their own in the perverse, yet natural parallels of chaos.

They’re arena rockers for the year 2031.

Listen to “Goliath”, quite possibly the heaviest and most hard hitting song the band has recorded or written to date. Bassist Juan Alderete fingers his way down to hell and back, paralleling yet another exceptional round of drumming from Pridgen. Bixler Zavala and Rodriguez-Lopez throw the band into a wagon, skirting down landslides of snychopated beats with a raspy edge and a witty lead.

However, the album starts to head off course. The chewy middle (“Tourniquet Man”, “Cavalettas”, “Agadez”) begins to taste stale and the heavy, fast pacing becomes more eccentric, yet less enduring. These feel familiar, organic (though the skeletal guitar in “Cavalettas” is very chilling). It’s not until the exceptional, atmospheric “Askepios” and the ultimately catchy “Ouroboros” that things start to both heat up and feel unnatural and interesting again. The latter is one of the most addicting tunes since the 2003 days of Deloused in the Comatorium. Bixler Zavala’s melodies and lyrics throw out a killer hook, chiming again and again, “Don’t you ever, ever, ever/ Trust my mercy.” The vaporous keyboard accents that introduce the song and permeate throughout it really add depth and variety, thanks to keyboardist Isaiah “Ikey” Owens.

The Bedlam in the Goliath is not the best album this group has to offer. Those days are either long ahead, maybe after some maturity, or already spent. Older fans of the band’s earlier heyday, or even throughout At The Drive-In’s long tenure, will appreciate this much more than either Frances the Mute or Amputechture. Yes, the songs’ average length still hover over five minutes, but gone are the scattered, deceitful solos or the drawn out delays. Instead, the band embraces the various sounds they can offer, but manipulate the moods that stem from their own derailed sense of creativity. It’s a really positive thing, coming from such a negative experience in the making.

Too bad they buried the Ouija board.