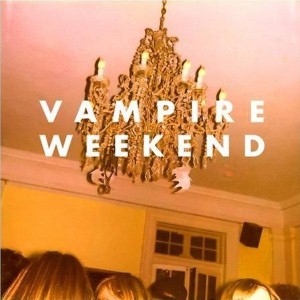 “I see a Mansard Roof through the trees,” singer Ezra Koenig declares. “I see a salty message written in the eves.” This surreal, poetic style is rampant on the self debut release for the Brooklyn natives, Vampire Weekend.

This isn’t necessarily a breath of fresh air, so much as it is a stretch of mental nirvana. What this quartet has managed to do is turn indie-pop into a cultural hegemony of both quality and allure. There’s angst, but not the typical sob-fest saved for records of late. These eleven songs represent a sunny day, where broken televisions, birthday cakes, and Rimbaud can all co-exist without bloodshed.

I’m not sure what that all means, but it’s the image I see.

“A-Punk” is the classic single that’s surely going to have this band find it’s wider audience. It’s a musical montage filled with a steady drum beat, roaming lyrics (“Johanna drove slowly into the city/ The Hudson River all filled with snow/ She spied the ring on His Honor’s finger/ Oh-oh-oh”), and a sugary sweet guitar lick.

It’s almost rudimentary nowadays to see crude imagery patterned against beautiful, cute melodies, but a song like “Cape Cod Kwassa Kwassa” somehow does it in style. Maybe it’s the references to Peter Gabriel, the African styled drumming, or the reggae styled bass line. I don’t know. The lyrics shouldn’t work, but somehow we’re okay with this. Or, at least I am.

By now, especially if this is the third or fourth review of this album you’ve read, the comparisons to Paul Simon, specifically Graceland, are all but conditional knowledge. Well, truth be told and with good reason. “M79” is proof. The 17th century-styled violins alone should sell you on that idea. I’ll add my own little tidbit, though. While this is no “You Can Call Me, Al”, “M79” is more fun than at least seventy-percent of Graceland.

Quite the statement, huh?

“Walcott” is the epic number The New Pornographers must have tossed aside last year when sequencing the rather boorish, Challengers. This is the song to hum along to, really. Especially the snappy verse as it builds up with ease: “Walcott, don’t you know that it’s insane? / Don’t you want to get out of Cape Cod/ Out of Cape Cod tonight?” I see the band using this as a closer in the next coming months.

While I’m certainly not the one to endorse any band (so don’t call me a Ted Kennedy, yet), Vampire Weekend is a thrill band. They’re a weekend vacation out of the city, but still with all the angst (“Oxford Comma”) and fear (“Bryn”) of what you left behind. Wow, that word ‘angst’ again, huh? I guess there’s reason for that. In all honesty, this is emotionally pulling music, but they instill such a vivid, literary sense to it that I find hard to ignore.

Maybe you will too.