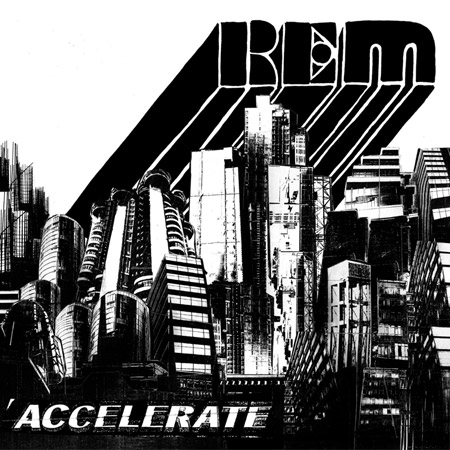 There’s something exciting about the big “comeback,” whether it’s in film, professional sports, or like here, in music. R.E.M. is staged for a big one and it’s long overdue. While 2001’s Reveal held some merit, it was 2004’s Around the Sun that didn’t go down so well. In some ways, the album sunk the band into a depression, literally and metaphorically. Though if its any indication, Accelerate is a perfect title to the band’s current state, where things are happening and Michael Stipe is in the headlines again.

Politically speaking, Michael Stipe is in the upper ranks. If his rapturous lyrics don’t send off that message, then maybe the appearances on 2004’s Vote for Change Tour will clue you in. If Bono is an idealist and Sting the surrealist, then perhaps Stipe is the realist in the political platform of music. This is a man that’s more inclined to fine tune his message than the instrumentation. His themes, inspired from his wit and imagery, are just vague enough to apply twenty to thirty years down the road. On their fourteenth studio album(yes, fourteenth), R.E.M. is continuing what they did best.

Accelerate doesn’t try to make the band grow, nor does it attempt to exfoliate the sound that made them Hall of Fame’ers. Instead, its more or less a throwback to the familial alternative feeling that started with 1987’s Document and peaked with 1991’s Out of Time. Why shouldn’t the sound remain the same? R.E.M. is as synonymous with alternative rock as McDonald’s is with America. With fourteen albums under their belt, the band deserves some time to, dare I say, “keep it real.”

For anyone whose stomach filled with butterflies upon first listen of the new single, “Supernatural Superserious”, rest assured this is a feeling that’s prevalent over Accelerate. Given the track’s roll call, anthem-like quality (” Everybody here/ Comes from somewhere/ If they would just as soon forget/ A disguise”), it’s odd that the song isn’t the album opener.

Fortunately, the album’s premiere track, “Living Well Is The Best Revenge,” is a rocking tussle that showcases a poppy, snappy Stipe who’s raw, bitter, and borderline nostalgic. Lyrics roll off the tongue (“All your sad and lost apostles hum my name and flare their nostrils/ Choking on the bones you toss to them”) and upbeat guitar riffs keep things moving along, thanks to Peter Buck.

There’s a wealthy collection of strong, solid songs that exemplify a wealth of talent in songwriting, which shouldn’t be a surprise given the band, but considering it’s their fourteenth offering, one would expect… less than. With “Man Sized Wreath,” Stipe throws out some social commentary in a declarative, yet nonchalant manner. “Houston” works in the same way that “Drive” did for Automatic For The People, it’s reflecting without being too introspective, where the listener is moreover a backseat driver.

While essentially a tight, consistent rock album, Accelerate does go soft. When the band’s not letting it loose with full on distortion, they’re changing pace in the verses. “Hollow Man” follows this pattern. The more somber, mature “Until the Day Is Done”, which Stipe recently dedicated to Heath Ledger at SXSW, is an appeasing ballad. Buck’s fine acoustic guitar work just heightens an already guitar driven record.

Those still pining for the return of drummer Bill Berry should be satisfied with touring regular Bill Rieflin, who shines in the Monster-era “Mr. Richards” and the punky, fun nonsense of “I’m Gonna Dj.” Even if R.E.M. was never known for accented drum fills or eye opening percussion, it’s nice to have someone keeping up with the other regulars.

Accelerate isn’t going to revolutionize alternative rock like say Fables of Reconstruction or Monster, but the simple fact that it sustains to be a consistent, highly enjoyable record is enough to put a smile on any fan or listener’s face. Everything here works upon first listen and that’s more than a good thing, it’s a great feat. Strong rock album or not, this 14th attempt is sure to pull R.E.M. ahead for a 15th, if that was ever a concern.