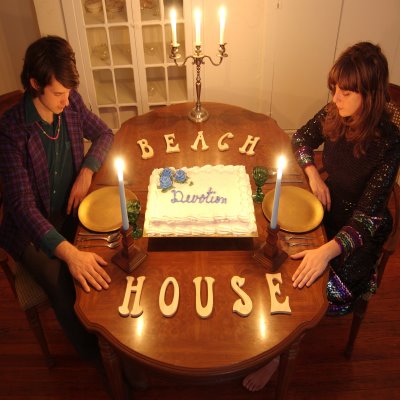 A wonderful thing happened today. While walking to my apartment, it began snowing and the chimes and bells of Beach House’s “D.A.R.L.I.N.G.” stirred in my ears. Bit by bit, flakes of snow fell in succession as the Baltimore group carried on. It all felt surreal, engulfing, and most of all, cinematic. Then again, isn’t that image befitting of a band under the rare yet inviting genre of dream pop?

While once the bastard love child of Pitchfork Media in 2006, Beach House is making waves elsewhere. Dare we say, a mainstream entrance? With Devotion, the duo, led by vocalist Victoria Legrand and guitarist Alex Scally, is raging up a storm and with good reason. It’s an eager release, baked with dreary melodies and overwhelming magnetism to Legrand’s vocals. It’s depressing, but in such a slender, posh way.

“Wedding Bell” is the type of song that might play at the gates of heaven, but only if it was being filmed by Michel Gondry. There’s that tongue-in-cheek melancholic vibe to it that’s so involving in each of his films (e.g. Eternal Sunshine of the Spotless Mind, comes to… mind). When Legrand wisps, “You’re ringing/ the only wedding bell”, no one has said “bell” in such a sexy way as she croons it, excluding Anita Ward of course.

Much of this “dream” nonsensical madness can be attributed to Scally, who plays the guitar in such a fragrant way that it becomes intoxifying. Not since maybe Robbie Krieger (of The Doors) has such guitar work felt so warm and snuggly. “You Came to Me” sounds like a b-side of the Waiting for the Sun sessions, while “Gila” has some scales that would make Brian Wilson (of The Beach Boys) salivate, if he’s not already. And who can resist the catty calls (the repetitive “Oh, oh, oh”s in “Gila”) from a singer who sounds stranded, desperate, and hungry for love?

As if it has a bi-polar disorder on it’s own, the album begins a moody descent that’s not bad, but just not as fun and involving as before. Instead songs “Turtle Island” and especially “Holy Island” revolve around this philosophical instrumentation that sounds more keen for psychiatrists treating those with existential crises than the average listener walking to the bus stop. The patterned drum beat of the latter song is hypnotic, layered with a tambourine and more of Scally’s trippy guitar scales. Is it inviting? Yes. Is it foreboding? You bet your ass it is.

“I’d like to be someone/ you could finally learn to/ love again,” Legrand repeats in the chorus, with some exchanges, for “Heart of Chambers.” It’s haunting, but in that catchy eidolic way that made songs like “White Rabbit” famous for Jefferson Airplane (Okay, I promise the ’60’s references stop there). “Astronaut”, on the other hand, is floaty and paralyzing, thanks to the symmetry between both the organ and keyboards.

Paralyzing has such positive and negative connotations with it, but it’s a good word to describe Beach House. For some, Devotion might do more harm than good to the average listener. Hell, you could probably fall asleep at the wheel listening to it. Regardless, it’s a great assortment of pop songs under the perfect nomenclature: dreamy. These are the songs of pure imagination, the soundtrack to every kid’s school day gaze. Let it burn.