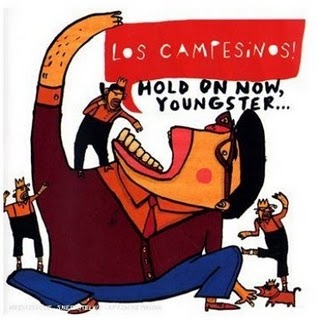 I first heard Los Campesinos! last fall. They were one another one of those “buzz” bands that everyone seemed to be talking about. I found a copy of their 2007 EP Sticking Fingers into Sockets somewhere on the internet and imported it onto iTunes. I pressed play and “We Throw Parties, You Throw Knives” soon blared from my speakers. The first thought that came to my mind was – I’m From Barcelona on musical steroids.

But as  I made my way through the EP, I soon found myself overcome by what best can be described as a “musical party”. Though large in size and diverse in sound, Los Campesinos! offered a sound that other bands could only dream of. “Don’t Tell Me to Do the Math(s)” was sweet and silly, yet aggressive and raw, bursting at the seems with energy. The uber catchy (did I really just use the word “uber”?) “You! Me! Dancing!” could best be described as a pep squad’s theme song. These U.K. natives had given the world a collection of music euphoria. Pretty good for a debut, huh?

So perhaps saying I was excited for the band’s release of their first full length LP Hold on Now, Youngster… was an understatement. While not entirely composed of new material, the album offers more than few previously unheard tunes. What’s more, the “old” tracks have been remastered, allowing for an even fuller overall sound. But then again, sound isn’t everything.

Hold on Now Youngster… greets listeners with “Death to Los Campesinos!,” one of these old, but “technically” new favorites. Despite its upbeat, almost “electrical” nature, the song’s clear warning against technological reliance offers a perfect example of the band’s often witty and contrasting lyrics – I’ll be ctrl-alt-deleting your face with no reservations/I will stop flighting once your circuit board’s igniting/ singing, “I’M NOT FINISHED, I’M NOT FINISHED! No!” Sure, their message is nothing new, but when you offer a sound that alone can overwhelm a listener, its refreshing to know Los Campesinos! are as smart lyrically as they are powerful musically.

Of the new material, “Drop It Doe Eyes,” offers a musically spacey, but all too real commentary on relationships, while the Mates of State-esque “…And We Exhale and Roll Our Eyes in Unison” provides a sobering look at women’s role in music. However, in the end, its one of the album’s more sincere pieces, “Knee Deep At ATP,” which perhaps best exhibits the nature of Los Campesinos!. The sound grows louder, the guitar rifts faster as it becomes clear that that the song’s character is experiencing unattainable love. The music grows with the pain almost as to convey that even in the darkest of times, something as simple as a song can get you through it.

Just because the lyrics and themes are depressing, doesn’t mean the music has to be. After all, isn’t that the point of music? Too provide a bit of happiness in your life? Sometimes, music can become too real, too personal. While the Los Campesinos! are by no means hiding from reality, they just let their sound do some of the speaking.

Life’s just one big party. Don’t get too wrapped up in it.