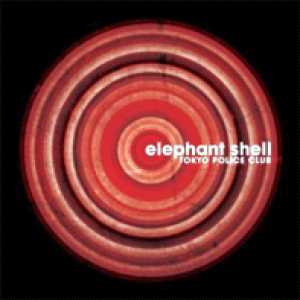 In the legendary epic poem The Odyssey by Homer, it takes Odysseus ten years to return home after his long and heroic battle in the Trojan War. Along the way, he battles with the mighty Cyclops, the double challenge of the sea monsters Charybdis and Scylla and the threat of his kingdom being overrun by his own forces. Odysseus remains optimistic about his return home to see his wife Penelope as well as reclaim his throne and lands after a lengthy battle with many would-be suitors and successors to his throne.

With the theme of patience and waiting floating high in the air, Canada’s hottest indie rockers Tokyo Police Club’s debut album Elephant Shell not only comes through the clutch, but proves the age old phrase that patience is a virtue. The band’s debut fresh off the processing plant conveyor belts of Saddle Creek opens with a bang, literally, with “Centennial.” Dave Monks vocals sound punchy, just like his bass and the overall production is tightly wound, but explosive. Josh Hook’s guitar fills in the cracks nicely against keyboardist Graham Wright’s chordal progressions. Visions of waterfalls and green grass come to mind as the keys do a great job painting the overall moods for the album. “In A Cave” follows next and the bass and drums punch together really well. There isn’t a single moment wasted here. The hooks keep coming left and right, given the punching metaphor in the previous sentence.

Seriously though, the band’s songs are well crafted, but a lot of credit goes to the production, which the band co-produced along with three other producers. “Graves” and “Juno” follow afterwards and by this point, Tokyo Police Club has outdone the hype and shattered the standards what are required for an official debut. Drummer Greg Alsop really keeps the band together as his drumming punches, pulls and keeps the band from faltering. In a sense, his drums provide a third melody to coincide with the keys and guitars. Monks’ vocals sound really clever amongst the chordal progressions and prove to the audiences abound that, as said before, the band lives up to the hype.

The best part about this album is the length of each song. While the album is twenty-eight minutes in length, the album contains eleven songs, with the average length copping out around 2:30. The band takes incredible advantage of this by crafting wonderfully interwoven melodies and instrumentation in a nice “3 minute box” type of deal. Much like The Beatles early material (1962-1966), Tokyo Police Club is great at cutting the fat of the song and getting to the heart without leaving out any important details.

The album rounds out nicely at the end with the final 1-2-3 punch of “Your English Is Good,” “Listen To The Math” and “The Baskervilles.” After the crunchy and dance-hopping 28 minutes finish themselves out, one thing is apparent that the album demands a replay. It’s that good. Tokyo Police Club comes lashing out of the cages with a strong debut and continues their musical journey with another great notch of garage rock indie to add to their catalog. If only Odysseus had a music player aboard his ship, the trip back to Ithaca wouldn’t have been so hard.