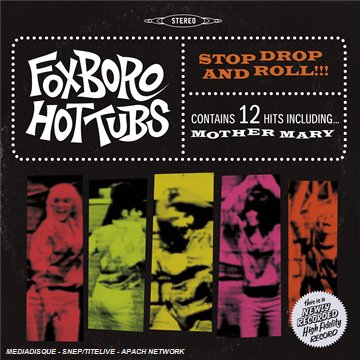 With the cat out of the bag now, it’s no mystery that the band members comprising Foxboro Hot Tubs are none other than Billie Joe Armstrong, Mike Dirnt, and Tre Cool. If you don’t recognize those names, you’ve either been living a Rip Van Winkle-like lifestyle for the past 15 years or you just hate modern rock. The boys that tore apart radio stations spanning every demographic and rocked out stages all across the globe in 2004 with American Idiot are back… sort of. With the release of Stop Drop & Roll, the trio (alongside Jason White & Jason Freese) have assumed a pseudonym and managed to build a time machine to take us back to the swinging sixties.

This is not Green Day. It could be, but it’s not. All connections lie in the familiar echo of Armstrong’s vocals or perhaps Cool’s steadfast drumbeats, but that aside, this is something else altogether. While most of Green Day’s material could be construed as poppy, snap n’ beat rock n’ roll, there’s a bitter wit and sarcasm that goes alongside the lyrics. Aside from the political connotations in American Idiot, much of their music is gritty, angst-driven punk rock (okay, we’ll go so far as to say, “pop-punk”). However, with Foxboro Hot Tubs, the grit’s there, but it is poppy, snap n’ beat rock n’ roll. In fact, Stop Drop & Roll is probably the most entertaining listen for it’s genre since Weezer’s 1994 debut. Yes, I just said that.

“Oh baby, aren’t you something,” whispers a sound bite stripped from 1966’s Who’s Afraid of Virginia Wolf. With a punch of distortion and the familiar wail of Armstrong’s guitar, “Stop Drop and Roll” claws open an album that pretty much never stops. This is a perfect opener, a throwback to the early roots of punk (The Who’s “I Can’t Explain” come to mind), though comparisons will liken it to The Hives. “Mother Mary” is easily the catchiest song on the entire album, where Armstrong pines, “Oh Mary, Mary take my hand/ I’ll be your saint/ I’ll be your man,” all the while there are Oo’s and Aah’s that draw back those sixtie’s doo wop ballads that used to dominate high school proms and ice cream socials.

Between the sound samples from ol’ sixties films, the fact that the album is split in half (Side A & Side B), and the album artwork itself, which is really a faded, warped ’45, it shouldn’t be too crude that most of the songs sound similar to past rock groups. The slower track on the album (which isn’t saying much), “Red Tide”, not to mention the rollicking “Alligator”, is a direct reflection on The Kinks, the latter sounding very similar to “You Really Got Me.” And as a self declared fan of The Who, its not hard to see the similarities between “27th Ave Shuffle” and “My Generation”, especially since Dirnt goes all [John] Entwistle on the track. Yet despite the parallels, its hard to throw any criticism here since, after all, this is a side project and its just too much fun.

Side project or not, there are some exceptional songs here. “Highway 1” would have your parents doing the Hully Gully and for our international readers, the Do The Freddie. These are pure pop songs and when Armstrong declares, “I’m on a mission from God”, one should take this with quite the apprehension. He’s having too much fun here to get political, let alone evangelical. If his throaty vocals don’t exemplify this, then his modest yet hard hitting solos sure will. Current single, “The Pedestrian”, has its hooks that will reel in the fans, but will most likely be swept under the other more hard hitting songs available.

There’s some weepy material here, much like “Dark Side of Night”, which seems to borrow some of the desperation and isolation of The Mamas and the Papas. Cool’s drumming stands out the most here, with some solid work on the snare. Though if “Novocaine” off of American Idiot continued Armstrong’s viable contender for ballads, then here he goes forward effortlessly. It’s rare when someone can go from point A to point C vocally, but its just been a matter of time for the short, spiky haired frontman. The album closer, “Pieces of Truth”, showcases a band with much more potential than the trio ever intended to be, complete with horns and organ scales. The amalgamation of noise is wondrous if not adventurous, nearly begging for you to listen again and again, which you will.

Stop Drop & Roll is by far and wide a perfect example of a band doing something for the sake of doing it. Not once during the entire listen did it feel as if the band members were taking themselves too seriously, nor did the sound ever grow stale. That’s exactly what music of this caliber should be, but never tends to be. Considering the pressure the band must feel in following American Idiot, Foxboro Hot Tubs is precisely the kind of vacation, or extended leave if you will, that needed to happen. Though if this album is any indication of things to come, the next Green Day album might burn a hole in every music fan’s pockets.

When the hell did that happen last?

Check Out:
“Ruby’s Room”
“Pieces of Truth”
“Dark Side of Night”