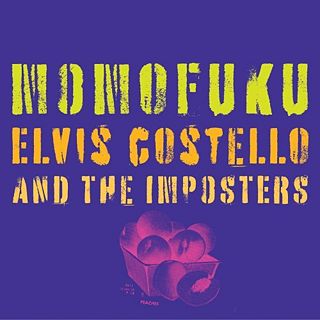 Elvis Costello returns to the studio with The Imposters (Steve Nieve, Pete Thomas, and Davey Faragher) for their first full-length offering since 2004’s brilliant The Delivery Man. Completed in less than a week (with some songs, Costello admits, written the night before recording), Momofuku asks listeners to embrace the same spirit of spontaneity in which it was recorded. The result is a album that’s free of affectation and characterized by the sincerity and subtle beauty of its imperfections. “Some rock and roll music is better if you don’t think too hard on it,” says Costello, a sentiment that summarizes this record as well as any.

As always, Costello maps out a winding and unpredictable musical path for listeners to follow him on. “No Hiding Place” and “American Gangster Time,” which open the record, are romps reminiscent of Costello’s heyday with The Attractions. “Turpentine” and “Stella Hurt” both feature Pete Thomas’s daughter, Tennessee Thomas of The Like, joining dad on the drums. Sometimes it’s easy to lose yourself in Costello’s trademark edgy delivery and Nieve’s wizardry on the ivories, but this pair of pounding tracks will remind you why Pete Thomas is still one of the best rock and roll drummers in the world. “My Three Sons,” a reflection on fatherhood, is the type of bittersweet ballad Costello has come to perfect in recent years, both in delivery and lyric. The only knock on Momofuku is that it drags a bit in the middle. Tracks like “Harry Worth” and “Mr. Feathers” never prove interesting enough to merit the listener’s full attention and beg to be skipped over, a rarity on a Costello record.

Jenny Lewis, of Rilo Kiley fame, emerges as an unexpected star, leaving her mark all over Momofuku. Her vocals create a rich layer of texture throughout, and her harmonies with Costello transform “Song with Rose” and “Go Away” into unlikely standouts. After having been treated to Costello’s duets with Emmylou Harris and Lucinda Williams on The Delivery Man, I was holding out hope that he and Ms. Lewis would trade verses on a song but no such luck.

Part of Costello’s success comes from constantly surrounding himself with innovative and talented collaborators, and that’s one of the reasons why a brief week in the studio can turn into an album as good as Momofuku. It’s also interesting to see two generations teaming up to make a record. While Costello has undoubtedly influenced Jenny Lewis and Johnathan Rice, the two young songwriters who helped spark the initial Momofuku recording session, it’s clear that some of their energy and impulses have rubbed off on Elvis as well. It’s anyone’s guess where this experience will take Costello and The Imposters next.