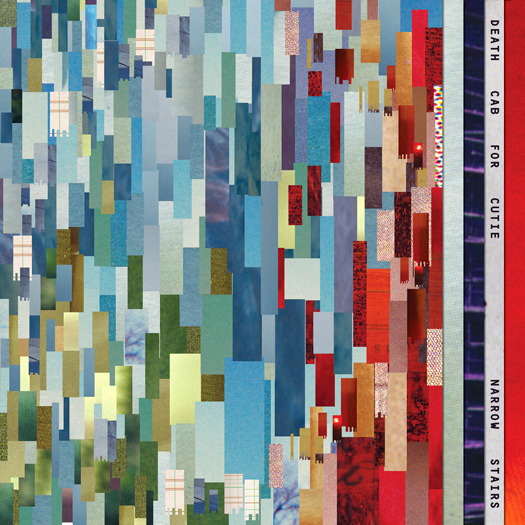 In about twenty years, if someone were to go back and hold up two albums, both 2000’s We Have the Facts and We’re Voting Yes and this year’s Narrow Stairs, the only similarity between the two would be Ben Gibbard’s shattered, soulful vocals, despite being under the same moniker. Arguably this is a good thing. Bands need to evolve, if not for the fans, then for themselves, the musicians, who desire that evolution in sound.

Three years have passed since 2005’s Plans, very likely the band’s finest, most consistent work yet. Around the time of its release, Gibbard had been dealing with the “better late than never” fanaticism of his side project The Postal Service (which I’m sure he’s written Zach Braff a thank you note for), while also coping with the idea that his band, Death Cab for Cutie, was heading towards open waters, leaving behind the struggling days as a small, independent act. Today, the Pacific Northwestern quartet continues to climb and the name of its current album mirrors this endless endeavor.

It’s clear at this point that both Gibbard and guitarist Chris Walla know how to write a hook or two. “Soul Meets Body”, “The Sound of Settling”, “Styrofoam Plates”, or even “Such Great Heights” didn’t just pop out of thin air. These are songs bred in rhythm and saturated in rich melodies. Each song off of Narrow Stairs capitalizes on this successful chemistry, only now its continuing that epic feeling which birthed in Plans.

This much is obvious by the first two tracks, the adventurous “Bixby Canyon Bridge” and the lengthy single “I Will Possess Your Heart.” In the former, there’s the signature glassy vocals of Gibbard, who rides on his Kerouac obsession, which has him finding lost souls in his own metaphorical desert. The instrumentation is tricky, too. Instead of the distortion winding down, it spirals up, out of control, almost shoegaze like, and when it ages to a soft purr, Gibbard returns to haunt us with lyrics, “Then it started getting dark/ trudged back to where the car was parked/ you’re closer to any kind of truth/ as I must assume is the case with you.” (Think of the ending to Wilco’s “I’m Trying to Break Your Heart” and you’ll have somewhat of an idea where I’m coming from.) Before there’s a place to breathe, the eight minute opus of “I Will Possess Your Heart” climb flips the tables on its listeners, where the romantic angst becomes scary and anemic.

Almost like a smack to the head, “No Sunlight” culls in some bright pop rock and runs off with it. The catchy chorus of “No sunlight, no sunlight” that’s followed by a driving bridge skates on brittle drum beats, thanks much to Jason McGerr, seamlessly changing to the next track, “Cath…”. These two songs represent a sweet, lofty yet tangy flavor to an otherwise mature, self conscious album.

“Talking Bird” will no doubt hear applause from fans of the band’s earlier work, more specifically 2001’s The Photo Album. Its slow burn and haunting droll (“It’s hard/to see/ your way out”) continues on in “You Can Do Better Than Me”, which sounds like a morphine induced version of Del Shannon’s “Runaway.” Whether or not this meditative middle represents the core heart of the album is arguable, but the pace is noticeably different than the more energetic bookends of Narrow Stairs. While the songs aren’t depressing chokers like earlier works “Little Fury Bugs” or “Lightness”, it just isn’t as motivating as say later songs, the melody driven “Your New Twin Sized Bed” or the punchy run of “Long Division”.

To be blunt, Narrow Stairs represents another bold attempt as the band continues to embrace the idea that their own smarmy drama pop should be less abrasive and grander on a scale both lyrically and instrumentally. If “Pity And Fear”, with its African beats and its steady guitar work that homages Ennio Morricone, doesn’t sell you on this idea, then you might need to aim lower, because this might be the first time the band has been this adventurous. Closing track, “The Ice Is Getting Thinner”, is indicative of Gibbard’s rocky, self loathing lifestyle, exemplified in its unforgiving lyrics (“We’re not the same dear and it seems to me/ There’s no where we can go with nothing underneath”). Musically however, it could be mistaken for “Steadier Footing”, as they both carry that morning after feeling.

Would it be fair to judge the album based on its lyrics? In a way, no. After all, Gibbard isn’t the only member of the band; however, its hard to feel fresh when there are songs still about reigniting romance with someone else or dealing with ill fated conflicts on a day to day basis. Then again, isn’t that why anyone listens to Death Cab for Cutie? There’s a sense of escape and parallelism in our lives that runs its course with Gibbard’s own, even if we’re not venturing into Kerouac caravaning lifestyles and soul searching on our free time.

Now to summarize, Narrow Stairs is another glossy volume of the same self introspective dramedies, which continues Gibbard’s plight in digging deeper than he really has to in life. He should be careful, though, because if one digs too far, they’re likely to strike rock and by then, they’re in too deep.

Fortunately for us, we can just turn it off.