Mates of State – Re-Arrange Us 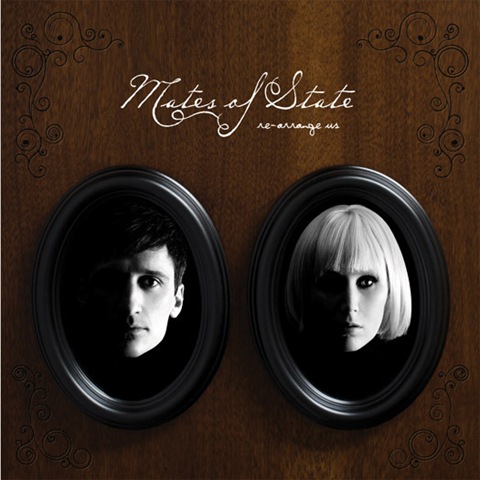 As first seen on WNEW.com…

After an extended hiatus which saw the birth oft their second child and a new found career in blogging, the duo consisting of Kori Gardner on keyboard and Jason Gammel on drums, better known in the music world as Mates of State, are finally back with their fifth studio album, Re-Arrange Us. And while their trademark exuberant energy and infectious catchy musical styles are once again, the husband and wife band decided to mix things up, and dare I say, even tone it down a little.

This time around, Mates of State took a simpler route in sound, or at least as simple as you can get when describing their rhythmic complex style, choosing to replace Gardner’s characteristic crashing organ for the modesty of a piano. As the album’s opening track “Get Better,” quickly illustrates, this simplicity not only results is a softer and richer sound, but also allows the true vocals talents of Gardner, something somewhat restricted in the duo’s previous work, to be exemplified brilliantly throughout. Between the interplay with her male counterpart and the various solo parts sprinkled throughout the 10-track album, Gardner is consistency ravishing, enabling Re-Arrange Us to become both the duo’s most beautiful and candid work to date.

However, piano isn’t the only new facet making up Mates of States ever-growing sound. The duo’s addition of more classical instruments, such as the cello and bass throughout, allow for an added depth of emotion to back each song. But in only a way Mates of States could pull off, the duo still manages to incorporate those trademark rhythmic bounces and contagious melodies that have allowed the two to become one of indie music’s favorite darlings. The repeating chorus and pop heavy beats of “Now” create an instant radio friendly hit, while the bold transitions and styles found in pieces like, “The Re-Arranger” and “Help Help” are a bit reminiscent of some of the duo’s previous work on My Solo Project and Bring It Back.

Lyrically, the album is equally emotional and powerful, once again depicting a look at the happiness and struggles that come hand in hand every relationship. “You Are Free” is a sobering illustration of breakup and the long journey for eternal love, while “Now,” though a bit bland, exuberates passion both lyrically and musically. The curiosity of love, parenthood, and today’s society are just some of the other topics examined throughout the emotional rollercoaster of stories present on the album, which for the most part, are conveyed, in their characteristic, upbeat, and always-catchy nature.

Re-Arrange Us not only offers the band’s biggest diverse work to date, but also represents two partners who both trust and believe in one another. In an album, which is full of experimentation and emotional exposure, the husband and wife chose for the most part to deviate from the chaos and complexity profound in much of their previous albums, for revealing simplicity. A decision certainly full of risk, but perhaps most appropriate for a duo whose music depicts the strength and power present in the love they hold for one another.

Check Out:
“My Only Offer”