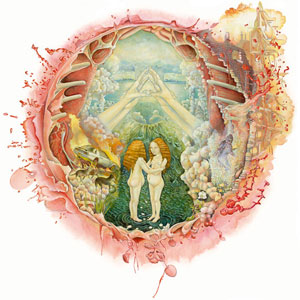 Arm’s Way, Islands’ second full-length effort and followup to 2006’s Return to the Sea, is an excellent mix of catchy tunes and strong musical skill from Nick Thorburn and crew, resulting in one of the most diverse and enjoyable new albums in recent memory. A veritable melting pot of musical genres and influences, unlike Thorburn’s previous works with past band The Unicorns and the Islands debut, this album focuses more on musical structure and tightness. While later tracks, “We Swim” and “Vertigo (If It’s a Crime)” lean closer to a progressive structure, earlier tracks such as “The Arm” and “Creeper” contain a pop friendly vibe. These early tracks make the album an excellent purchase for anyone wanting to expand their musical intelligence, without becoming lost in long drawn out abstract tracks. What’s more, added to the stunning violins, deep bass saxophone and ferocious drums, is an amazing vocal performance by the aforementioned frontman. In other words, Arm’s Way is a complete effort from all parts of this six piece Montreal band.
“Pieces of You” is a prime example of Islands working together to create magnificent music. The stunning chorus provides layers of musical partnership, most notable are the excellent sax and striking violins when Thorburn bursts in “they wanted pieces of you, pieces of you…” Definitely  a more pop friendly track, “Pieces of You” is one of the shorter and less progressive tracks on a very diverse album. From the Paul Simon influenced rumba section in “J’aime vous voir quitter” to the Spaghetti-Western guitars on “The Arm,” the Pink Floyd stylings of “ Vertigo (If It’s a Crime), and the classical violins on “To a Bond” Islands are the most dissimilar band of the current indie rock circuit. Creating each track different from the next not only allows Thorburn to display his vocal range, but also the true unity of this revised Islands band.

While the tight instrumental sections and extended tracks display Islands musical strengths, from a listener’s perspective the short catchy songs are what make Arm’s Way great. Songs such as “Creeper” and “Kids Don’t know Shit” are great for any situation or  group of people. Islands will expand their popularity with these tracks, yet their progressive roots are still found throughout. Constant transitions and a strong cohesive band are two characteristics which further make the album a pleasant surprise. In a genre filled with bands trying too hard to be different, Islands blend of pop and progressive rock is an excellent reminder that rock music still exists. Just like the band’s slogan states: “Islands are forever,” Arm’s Way will undoubtedly become an album which cements Islands into a new echelon of indie music.