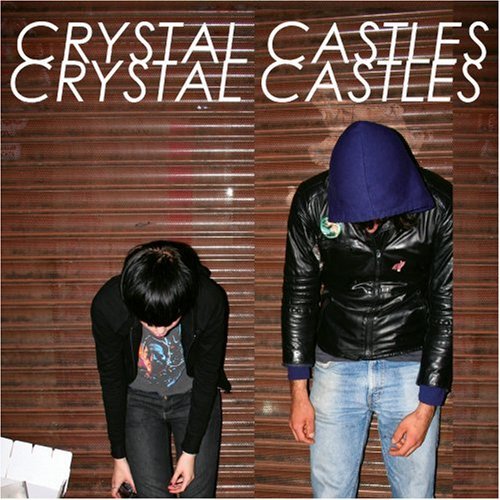 With their self-titled, full-length debut, Crystal Castles have become the next big thing to music fans and the music press. But then again, they do have a similar pedigrees to many other acts who have at one point or another, donned the same title, so maybe it shouldn’t come as much as a surprise…

But for an album that features samples from Death From Above 1979, Grandmaster Flash & The Furious Five, Health and others, the one thing that stands out on this album is the pure originality of the recordings. The 52 minutes encapsulated in Crystal Castles drips with a bizarre nostalgia for the 1980s. The main reason for this being the Atari video game chip jammed into programmer Ethan Kath’s synthesizer. Like almost every other band in indie music right now, they wear their influences and favorite decade not on their sleeves but loudly on all their clothing. For one thing, the band named themselves after She-Ra’s castle, so there’s not a lot of confusion on which decade this band wishes they were from.

As for the music, tracks like “Untrust Us”, “Magic Spells”, “Air War” and “Vanished” all have a simple instrumental-like beauty you can savor while enjoying your personal Cherry 2000. “Untrust Us” features heavily distorted vocals from both members of the band and could very well be confused for gibberish or Japanese, but the simple bouncing beats make the song hypnotic. “Magic Spells” is a doozie of a track, clocking in at over six minutes; nevertheless, the song starts off featuring loops that are almost impossible to decipher which gently transition into James Murphy style smoothness. Eventually near the end of the song, distorted vocal loops come into play, but for the most part, this is the main instrumental track of the album.

“Air War”, which is slowly becoming their next “single”, is pretty grating on the ear for those unfamiliar with the band, featuring very high pitched sounds that carry vocals that seem to echo for more than most people can stand. Essentially, this is the track where you pick sides on whether or not you can stand the band. “Vanished” is one of those “end of the album” tracks and it is interesting to note that Alice Glass is barely found on the song, which means it adds a heaping pile of variety on a female vocal dominated album.

Of course, a good musical kick to the groin can be good and with a singer like Alice Glass, you can’t really avoid it. Glass will undoubtedly remind people of Karen O, Jemina Pearl, or Ida No, but the difference is Alice Glass somehow gives less of a fuck.  Essentially the prototypical look of any  female singer in an underground-band, Glass has the short black hair, the angry snarl on her face, an odd vocal range and a singular fashion sense.  But you can’t really see that on the album, so you have to feel it and you can on  tracks: “Alice Practice”, “Xxxzxcuzx Me”, and “Love and Caring”.

“Alice Practice” was previously released on their demo EP and is much more polished, utilizing an extreme 8-bit dance track that expels unintelligible (screamed) lyrics, a steady drumbeat, and sounds Nintendo’s Kirby might hears in it’s nightmares. Definitely a track to look up. On the other end, “Xxxzxcuzx Me” is similar to “Alice Practice” in style and product, but shorter and a bit more aggressive, in terms of drumbeats. And “Love and Caring” is easily the most ironic track on the album, where the song is either a) heavy on the drums or b) assaulting the listener with Alice singing as all times.

Most of the 16-track album not mentioned already is a little more balanced and can be enjoyed at most times.  Now, I’m sure some people will read this because they might have heard one of the band’s more popular tracks “Crimewave”, which is a joint venture they did with Health, and I will say if you are a fan of that song and want to know if the album holds up….

It does. “Crimewave” is a standout track and will be played in commercials a few years from now, it will be in cool clubs for the next half decade and you will hear it waiting for bands to go on at small venues, but those only knowing that song will not be disappointed. Although, one of the few complaints is that like most albums, it does peter out at the end and becomes just another good electronica release. But then again, with an album of such high energy and originality, it’s hard to make it last.

And to clear up a common misconception about Crystal Castles, I looked it up, they are not from Los Angeles, they are from the indie music hotbed of Canada. So as a nation, let us come together with our neighbors to the north and get drunk and listen to video game sounds in dance songs.