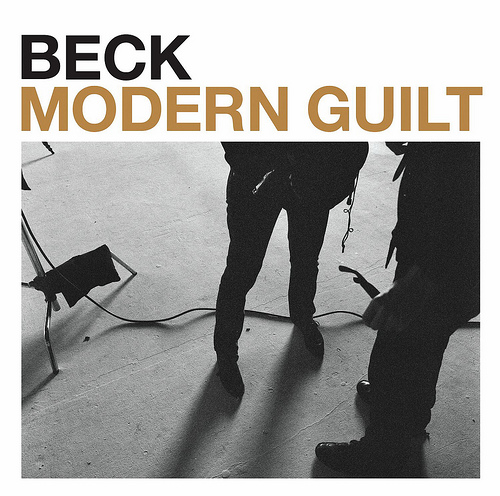 From his inception with the tongue in cheek titled debut, MTV Makes Me Want to Smoke Crack, it was quite clear that Beck was destined to stray far from the road of normalcy. But, that’s why he’s lasted so long. After ten albums, and that’s not counting his “other” releases and guest appearances, one would think that he’s grown bored or at least worn down some creatively. Yet, the opposite has seem to occur. While many will wager that 1998’s Mutations is his magnum opus, some will argue (like me) that 2002’s Sea Change was when he really came into another, more ethereal, level. Not to mention, nobody complains about the intensely fun Guero (2005) or the create-it-yourself tomfoolery of The Information (2006). So, why stop with Modern Guilt?

Taking some time off proved successful for the fliest white guy in America. Not only did he manage to nab a Grammy nomination for the ultimately forgetful “Time Bomb”, but he snatched up producer Danger Mouse and put together a collection of reflective, self involving songs that bridge the gap between the mellow waves of Sea Change and the poppy electro-beats in Guero. And that’s a good thing, sort of like finding that object you were once looking for years ago. In other words, better late than never.

There’s a nostalgic, dusty feeling to Modern Guilt. One might lay credit to Danger Mouse, who enjoys throw backs to the ol’ sixties and seventies, specifically the Motown era, but much of it chimes from Beck’s wavy vocals that float on and on through track after track. In “Orphans”, the album’s opener, religious connotations are thrown around, as he sings “If I wake up and see my maker coming/ With all of his crimson and his iron desire.” It’s a thumping song and one that sets the tone for the rest of the album. “Gamma Ray” plays off like a 1960’s beach thrill, if only Frankie Avalon had passed around hits of LSD rather than cheesy smiles. If the drums and orchestration don’t sell you on Danger Mouse’s lending hand, then you’ve never listened to a Gnarls Barkley record.

“Chemtrails” is Beck chanelling Oasis. It’s one of his stronger, more diverse singles, but the entire thing has a very druggy personality to it. The lyrics seem to parallel this idea: “So many people/ Where do they go?/ You and me/ Watching the sky.” If anything, it proves Beck has a happy home waiting for him, in Greenwich Village circa 1967. “Modern Guilt” follows with a drum beat that rivals Wayne Newton’s “Danke Shoen”, bringing about the overall theme of the album, which might possibly be dissatisfaction. When he states, “I feel uptight when I walk in the city/ I feel so cold when I’m at home/ Feels like everything’s starting to hit me”, it’s as if he feels the future is a lifetime in mono.

“Druggy” is a fantastic word to describe this album, namely because that’s what many of these tracks tend to achieve. There are hints of that upbeat melancholic mentality akin to Guero or The Information, as seen in “Youthless”, but they’re glossed over in this seemingly bored state that Beck’s stuck in. Fortunately for the listener, it’s interesting if not depressing. Take, for instance, “Walls”, in which he throws out declarations like “Some days are worse than you can imagine” or “What are you going to do/When those walls are falling down/ Falling down on you.” By the second half of Modern Guilt, its clear someone’s not thinking happy thoughts or just having a bad trip.

If anyone’s ever wondered what a Radiohead/Beck collaboration might sound like, specifically post-2000, then “Replica” is your answer. Static drumming and reverb-laden guitar licks bring about a Kid A specific world for our trusty vocalist to swim in. Shortly following, “Soul Of A Man” is a rollicking, drum thumping, garage rock number that puts some energy in the air, which is fitting for the driving, nerving ambiance in “Profanity Prayers” that arrives next.

By the end of Modern Guilt, Beck wonders, “Was it all an illusion?”, in “Volcano.” Good question. After the lyrical madness that makes up this album, one should be concerned for the guy. If it’s any consideration, this dreary slip was bound to happen, especially when he went from singing about a “Girl” in 2005, then onto his “Nausea” in 2006, and last year’s paranoid “Time Bomb.” While it’s not the most fun you could have within his discography, it’s one of the more intriguing releases in recent memory. The sleek yet rustic production offers a great escape to the digital monotony that would have likely plagued him otherwise. If anything, this is going to sound great in the middle of the night.