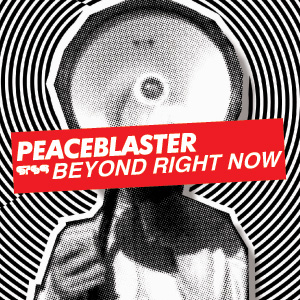 Sound Tribe Sector Nine (STS9) has become an independent touring giant in recent years, selling out large venues such as the annual pilgrimage to the Red Rocks pavilion just out side of Denver, CO. They are a “must book” band for any of the major jam slanted festivals, and provide, to this date, the only live set of their kind amongst the others in their field that get lost amongst the menagerie.

Peaceblaster is the band’s fourth, full-length album, but is amongst a dozen or so live recordings as well as remix albums and a stellar live DVD. Their sound is as diverse as it comes mixing rock, jazz-fusion, trip-hop, and dance. Thankfully with this latest disc, they have come closer to capturing their live energy on a studio recording. Previous albums such as 2005’s Artifact or 2000’s Offered Schematics Suggesting Peace were by no means bad albums musically, but what they lacked was the intensity that Brown, Learner, Murphey, Phipps, and Velmer deliver on stage as they pummel your senses to the brink of overload.

There has always been a strong socio-political message with the band. This is evident in their song titles and album names, and continues with this record. The first two tracks “Peaceblaster 68” and “Peaceblaster 08” provide stark contrasts in tone with the opener sounding positive and loving, while the later is more representative of our confusing and tumultuous times, presenting a more industrial feel. There is an immediate and stronger influence of house music present here in the undertones of the beat as they layer it with a funky guitar style reiterating what we have known, that this band has no bounds musically. One element that is always lacking with their records however is a fuller presence of their drummer Zach Velmer. Live, he is all over the drum kit, providing organic as well as synthesized drum beats (the ladies love his looks too). On record, it’s that element that really holds the sound back, and if turned up, it would boost the record quite a bit.

At about the middle of “Metameme”, Velmer kicks it up to full throttle, taking the track from one plane to the next, adding speed and force before bringing it back down for the guitars to take over once again. The entire record is filled with moments such as that moving the listener through a musical journey. The band flows effortlessly from the loopers, keyboards and synthesizers to jam style guitars and bass. A song can sound like two or three by the time it is through and the track fades out into the next. You may think it’s over, but it’s not until they say it is, and at 15 tracks that reach close to 10 minutes at times, they really want you to listen. The five musicians of this tribe know how to create a built up, and being an act that focuses on the live performance, that is key for them, especially when they often run until the sun rises.

The first site of tangible social commentary comes with “Regeneration”. This song opens with a prerecording of news commentators discussing the over saturation the youth with media. It is only a minute long and leads right into the next distortion heavy track with out blinking an eye. “The Last 50,000 Years” is another example, getting the listeners’ inner political monologue going as the members chant/sing “we will find our way” over an ancient tribal sounding track. Each song carries a theme to it. “The Fog” has a more eastern-Asian feel; for example, while “Hidden Hand, Hidden Fist” sounds like the soundtrack to an early eighties horror film mixed with heavy guitar laden hip-hop beats.

As mentioned previously, the best way to experience this music is to see it live, and no matter what you are into, you will have an amazing time. Until then, Peaceblaster is the band’s best studio effort to date, only barely outdoing the last. So push that bass up and enjoy.