Staind – The Illusion of Progress 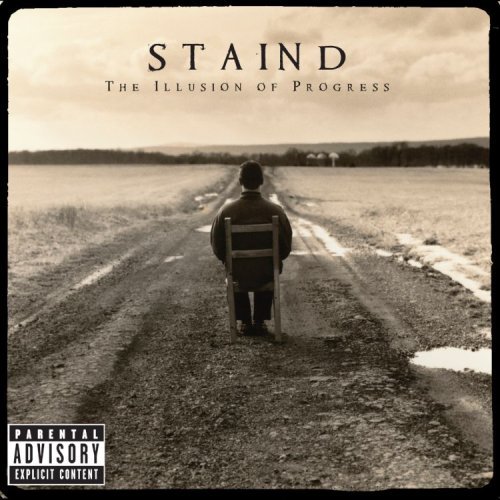 There was once a time when I would have paid $15 to buy Break The Cycle by Staind. Despite the power of Dysfunction’s “Mudshovel” or Break the Cycle’s over played single, “Outside” – it is safe to say that the ’90s was the peak of Aaron Lewis’ melancholy rock ensemble known as Staind. After trying a more positive approach with certain tracks on 14 Shades Of Gray, and even coming up with a  few goodies, it has still become an ever difficult chore to stomach the most recent sounds produced by Staind. Nevertheless, there was a rumor that their latest installment, morosely entitled The Illusion Of Progress, would be their best yet.

The biggest letdown?  The title stands to prove what Staind has really shown – an illusion of progress.

The first half of the Massachuett natives’ sixth studio album comes off like a band trying any desperate attempt they can to remain current and fresh radio-play regulars.  Aaron Lewis’ lyrics seem generic, lacking the passion previously found on their first few albums up until Chapter V. Everyone who has listened to the song “Believe” might agree that it sounds maddeningly similar to their single “Right Here”, but with a lighter tone.  Granted, I know that bands who have been around a while run that risk, however if it all starts to come off as formulaic, then one must draw a line.

When we last heard Staind, they had touched back on their roots again and managed to at least churn out some powerful message-laden music (listen to “Paper Jesus” and “Reply”). This album shows a band that has officially run its course, and not a minute too soon – or in fact, probably 3 or 4 years too late. While opener, “This Is It” proves Staind can crank up epic velocity in radio rock, the song “The Way I Am” is sophomoric poetry at best, with a simple “the way I am is the way I am” finishing off the chorus via adolescent extremes.

The third track, and the first single, “Believe” – well, we already know how that turned out.  After surging through the unimportant muck of “All I Want” and “Save Me”, we get towards the last half where a couple of stand-outs are in fact present. Take “Lost Along The Way”. It is inherently Staind, and even has elements of early 90s alternative (save for Aaron Lewis’ distinctly glum vocals).

Another upside?  “Break Away” is actually the one really good song on here, and if you get the bonus edition, you’re graced with yet another acoustic version of “It’s Been Awhile” (as if that song could be any more depressing). By closing, the quality is again nonexistent, giving way to another identical chorus, another useless attempt by Staind to impress. This broken record style eliminates any trace of decency, ultimately causing the The Illusion of Progress to fail, becoming its own self-parody.

Honestly, if an album stands to be worthwhile on some level, it has to be remotely memorable – and there is no essence of such a notion present on The Illusion of Progress. The whole thing blurs together nonchalantly, as if to say “Here’s another record for our checklist.”

Words of wisdom – it’s better to burn out than to fade away.