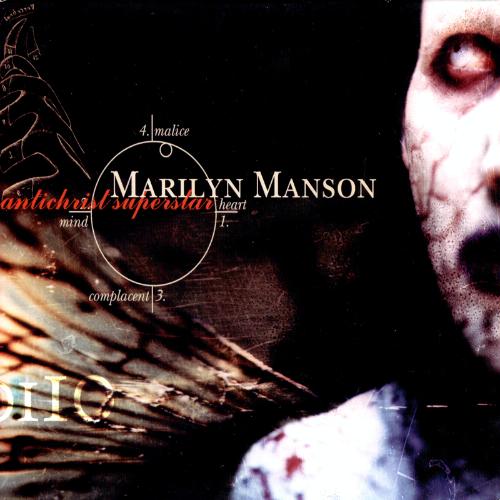 In our new feature, “Dusting ‘Em Off,” we’ll be reminiscing on some albums from the past, giving them another take or a closer inspection. Think of it like an album review, or something similar, but only we’re coming into it with typically ten to fifteen years of hindsight. This could get exciting, right?

The year was 1996 – grunge spawned post-grunge, the terms ‘nu-metal’ and ‘rap-rock’ were everywhere, and a pissed-off kid named Eminem was releasing Infinite, which eventually slammed him onto Dr. Dre’s radar. Above all things, Marilyn Manson — much like Alice Cooper and Ozzy Osbourne before him — became synonymous with controversy and shock rock. It would be three years before the Columbine Massacre, but Brian Warner’s face was plastered everywhere when the album Antichrist Superstar hit the shelves. “The Beautiful People” became an anthem for everyone who felt underestimated or overshadowed by narcissistic cliques and hypocrites the world over.

It’s no secret that Warner (a.k.a. Manson) is intelligent, or that he enjoys pushing buttons. Every album up until Eat Me, Drink Me has tackled issues on multiple levels: Mechanical Animals spoke of drugs and vices; Portrait Of An American Family was exactly as it claimed (albeit morbidly so); Antichrist and its follow-up, Holywood, addressed religion and politics. Why Antichrist Superstar? Why revisit it now?

In the music industry, artists of every sort have their niches. Marilyn Manson — comprised at this point by himself, Ginger Fish, Twiggy Ramirez, Daisy Berkowitz, and Madonna Wayne Gacy — was, first and foremost, an alternative rock band. They had set out to shock, amaze, disgust, and make you question everything about society or humanity in general.  This band remains alone in juxtaposing serial killers with celebrities, which speaks volumes about the message its leading man chose to illustrate during the release of this record.

As you open the package, Kabbalah symbols are meshed with medical terminology to describe the metamorphosis of worm (man) to angel (God). The songs are set into three categories, and the entirety of Antichrist is cyclical in nature  — beginning and ending with this phrase: “When you are suffering, know that I have betrayed you.”

Antichrist Superstar is a bit vague on a solid concept until you read between the lines; however, Marilyn Manson the individual has clearly cut agendas, seen in various interviews.  One such interview pitted Warner against Bill O’Reilly, where Bill questions the motivations behind profane language and graphic lyrical content.  The whole time you hear a civilized conversation, which seems the polar opposite of what you find on ANY Manson recording, proving that it truly is meant to shock.  It’s not a play-by-play interpretation of true-life behavior. It’s metaphorical.

Songs like “The Reflecting God” and “Antichrist Superstar” show you mankind as it believes itself to be — godlike. “Mister Superstar” and “Angel With The Scabbed Wings” show us why idolizing human beings and celebrities has become more of a perverse act than anything we’d ever hear on a record.

With a message this blunt, there was controversy as per intention. Christians protested the release, just as GLADD protested The Marshall Mathers LP (no wonder MM and Eminem get along so well), and Manson simply retorted a few years down the road during an interview with Michael Moore in the film Bowling For Columbine. Everyone seemed against letting kids listen to Manson because they feared it would provoke violent action, but this shows where the head really is:

“Michael Moore: If you were to talk directly to the kids at Columbine or the people in that community, what would you say to them if they were here right now?

Marilyn Manson: I wouldn’t say a single word to them, I would listen to what they have to say and that’s what no one did.”

Every generation has what’s designated a “counter-culture”. Theodore Roszak coined this neologism, and it’s defined as such: “…the values and norms of behavior of a cultural group, or subculture, that run counter to those of the social mainstream of the day; the cultural equivalent of political opposition.”

If our mainstream society is based on news running footage of AIDS epidemics and wartime attacks in tandem with car and toothpaste commercials, then Marilyn Manson was the counter-culture that asked you to question your belief structures, not to mention your media. Antichrist Superstar is the epicenter of what they stood for in the ’90s, and lives on — despite that era’s checkered landmarks — as a rock classic.

It is precisely what they have always said: there is no such thing as bad publicity.

Where to Pick it Up: