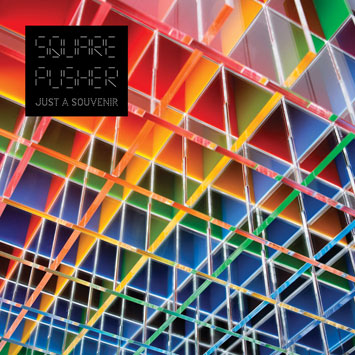 Everyone knows that the first rule of midnight snacking is “don’t eat spicy food before sleeping, or you’ll get weird dreams.” Everybody except Tom Jenkinson.

Tom who? Tom Jenkinson-aka Squarepusher, the electric bass wizard/IDM mastermind who made his mark with mind-bending albums like Hard Normal Daddy and Music is Rotted One Note. And while Jenkinson’s latest release, Just a Souvenir, is all but brimming with the blip-blop beats and frenetic electric bass playing that made him an underground sensation, it’s the album’s bizarre concept that really sets this one apart from the pack.

Jenkinson writes on his website that he had a strange, hallucinatory daydream, featuring “a crazy, beautiful rock band playing an ultra-gig.” Jenkinson further claims the  goal of Just a Souvenir is to “do honour to this remarkable vision of an ensemble”-no mean feat when the group is made up of an Eskimo drummer, a time-warping bearded classical guitarist, a Venus fly-trap, a gigantic glowing coat hanger, and some kayaks.

In order to sonically represent “a Cro-Magnon man and a Homo Erectus playing Monopoly”, Jenkinson adds a few new sounds to his habitual spread of electro-jazz drum and bass-namely a classical guitar that can “accelerate or decelerate time” and a snarling bass fuzz that is supposed to cop the tone of a bassist “using the entire building as a speaker”.

Some of these go over better than others-the growling bass distortion, which in Jenkinson’s words sounds like “an RSJ being played with a chainsaw”, is a cutting texture which adds to the “crazy, beautiful rock band” vibe-but quickly grows old by mid-album tracks like “Planet Gear”.

Jenkinson isn’t afraid to go into unfamiliar compositional territory, either. Familiar structures persist, like the tumbling bass jams of “Potential Govaner”-but it’s multifaceted micro-epics like “Tensor In Green” and the Jenksinson’s go at metal riffs on “Delta-V” that throw a few curveballs to an already curveballed-out crowd.

The strangest track, by far, is “A Real Woman”, in which Jenkinson tries his best to make Squarepusher sound like a garage rock band. He really does go the distance-including a full set of lyrics (apparently about a robot in love with a human woman), a three-chord punk structure, and an eight-bar bridge. It’s hardly Elvis Costello, though-impossible ride cymbal programming, hotwired Jaco Pastorious bass fills, and Forbidden Planet robot vocals keep even this song firmly rooted in the weird.

Where Jenkinson best succeeds is with the Back To the Future solo guitar timewarps, where he welds the glitch-and-gurgle drum treatments of IDM masters like Venetian Snares and Aphex Twin to his formidable classical guitar skills. Not only do tracks like “Yes Sequitur” and “Open Society” offer the closest play-by-play of Jenkinson’s jalapeno-fueled nightmare, they also stand up the best outside of the album’s conceptual constraints.

Although Jenkinson outdoes himself with new sounds and warped takes on rock-isms like punk songs and guitar solos, the major problem with Just a Souvenir is that it doesn’t stand up without its ridiculous concept. Listening for the parts that are supposed to sound like “the drums in the drummer’s drumkit rapidly exchanging places with each other” and “a river [appearing] on stage” is the only thing that holds together interminable vibraphone and distorted bass explorations like “The Glass Road”.

Admittedly, this album has enormous shoes to fill. Previous albums like Music is Rotted One Note were a success because the way in which they fused jazz and electronic music was unprecedented. While it’s admirable that Jenkinson isn’t trying to write Go Plastic, Part VIII, the sad truth is that without the acid-fried dream sequence to give the album structure, Just a Souvenir comes off as nothing more than a schizoprhenic 44-minute cut of Weather Report’s “Birdland” as played by a band of modems. Or, more realistically, Jenkinson going down a laundry list of genres and sounds, searching (and not finding) external inspiration for his signature Victor-Wooten-jamming-with-R2D2 style.

Either way, it’s an album that sounds like it was a lot more fun to make than to listen to.