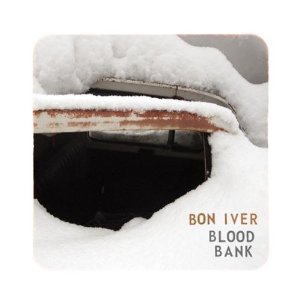 Either Justin Vernon has particularly warm blood or he’s just plain fond of the chill. As if this/last year’s For Emma, Forever Ago weren’t cold enough to go around, the Wisconsin native better known as Bon Iver is back with more. But really, there should be no complaints about a freeze that is so pleasing to the ears. In fact, most of us are probably eager to hear whatever Bon Iver material we can get our hands on after hearing his magnificent debut. Lucky for us, he knows this, and has acted accordingly.

Bon Iver’s Blood Bank EP is a four track collection of the atmospheric folk that has become synonymous with his name. This being said, it would be unfair to say that it is simply more of the same from the bearded folkie, because it isn’t. While it may immediately sound just like the Bon Iver we all know, there is enough going on here to set these new songs apart from the old ones. But let me explain.

The effort begins with its title track, “Blood Bank”, possibly the man’s coldest track to date. The song whizzes into your ears after a seemingly deliberate five seconds of silence. Taking off with its cool and whispery “woooos”, Vernon begins, “Well, I met you at the Blood Bank,” before images of stacked cups of blood, snow storm auto-entrapment, never to be told secrets, and of course, love, make their presence felt.  At a glance it is mostly just more of the Bon Iver from For Emma, but he has definitely made some noteworthy departures. On top of the ever-present layered vocals, Vernon has taken slightly more of an electric approach; however, the amps don’t detract from the Bon Iver sound. In fact, you might not even notice them if you weren’t paying attention.

“Blood Bank” fades seamlessly into “Beach Baby”, a short song that retreats back to the acoustic axe, but also brings along a steel pedal guitar. It’s a pretty track, which prominently features those nearly unintelligible, soothing Bon Iver vocals. Its brevity works as a bridge into the set’s third selection, yet another deviation for Vernon.

“Babys” is a jumping piano driven tune, which dwells on the same repeating high notes for almost a minute and a half before vocals make an appearance. Soon enough, Vernon’s soulful falsetto echoes in and the piano takes a break, before returning for accompaniment as the song builds up and it all drops out. This is most certainly a different sound for Vernon, but the Bon Iver sound is so subtle and subdued, that it could go unnoticed. The end effect is the same, but the way he gets us there is different.

The EP ends with a most peculiar experimentation for Vernon. In a track that could play off as a joke just as easily as it could be taken seriously, Bon Iver does the unthinkable: he autotunes his voice. High, digitized voices coexist with unbelievably low ones, and make for an… interesting listen. At first this seems completely out of character, even absurd, but with each subsequent listen it fits perfectly with Bon Iver’s sound and creates the same beautiful yet gloomy ambiance. Whatever the result, Vernon should expect a call from Kanye West, but who knows whether the call will be an angry or a pleased one.

Whereas some experimentation may detract from what made us love a band or artist in the first place, Bon Iver has succeeded in introducing new instrumentation and effects, without compromising his sound.  Listening to Blood Bank is as comfortable and familiar as it is fresh and new. The songs invoke the same feelings and create similar atmospheres, but utilize new techniques to do so. Vernon is definitely trying new things, but he is in no way abandoning what made him so great in the first place. From the first listen, we still feel at home, only now that home has some new furnishings that, quite frankly, go well with the place.