Bruce Springsteen – Working On A Dream 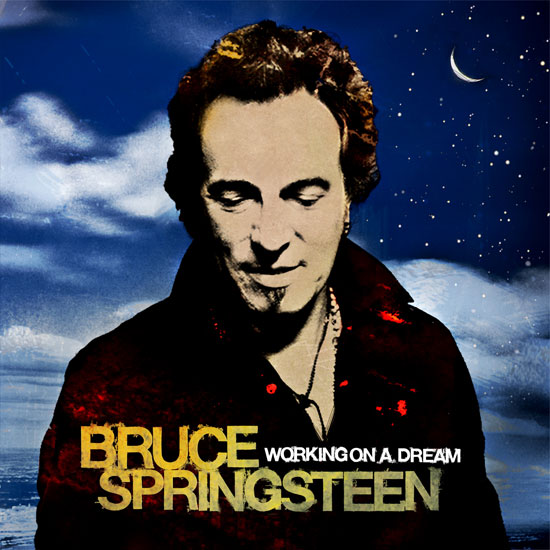 Bruce Springsteen’s 1978 classic Darkness On The Edge Of Town ignited a trend of the everyman legend tightening his sound with each album, abandoning the drunken street poetry, production heavy jam of his first three outings in favor of a more cohesive body of work. His subsequent recordings favored shorter, cleaner songs and lyrics more rooted in the literal and narrative. The Boss went from Kerouac to Steinbeck overnight, even naming his eleventh studio album after the protagonist of The Grapes Of Wrath. But 2002’s The Rising (his first album with the E Street Band in eighteen years) and 2007’s Magic saw a return to longer songs with flourishing wall of sound experimentation, making for a career that has reversed itself with age. Springsteen adopts this philosophy to an even larger extent on his sixteenth album, Working On A Dream, exploring the middle of the road with the marriage of his most detail heavy production since his 1975 masterpiece Born To Run and his most straightforward lyrics since 1982’s Nebraska. The result is an album that ranks with his best work, an unbelievable feat for a 59-year-old working class musician from New Jersey who keeps getting better with age while many of his peers devolve into nostalgia acts.

From the get-go, it’s clear that Springsteen has no intention of settling down to secure a spot on adult easy listening stations. Opener “Outlaw Pete” is a darkly comic opus of an ill-fated bandit who began robbing banks when he was still in diapers. Despite the somewhat amusing lyrics, Springsteen treats the subject matter seriously with menacing cello, haunting backing vocals, and the momentum of more guitar, mandolin, and piano than Phil Spector could cram into his studio, all courtesy of his tightly knit E Street band. The late Danny Federici stands out on the track, driving the woodsy gunsmoke with his lonely pipe organ.

Springsteen continues the ironic storytelling intertwined with dire production values on “Queen Of The Supermarket”, a tale of desperate romanticism between a regular Joe Schmo and a checkout girl, whom the narrator elevates to dangerous god-like status; a woman with a smile so electrifying it can “blow this whole fucking place apart.” Like “Outlaw Pete”, it’s chock full of lush instrumentation that compliments the song’s subject matter. Whereas the former is firmly cemented in predatory Western looming, “Queen Of The Supermarket” is simply majestic, the rainfall patter of Roy Bittan’s piano and Federici’s church organ blending in with Soozie Tyrell’s movie score strings and the celestial choir vocals of the rest of the band for a cacophonous sound that could bring down the heavens. Everything dissolves to a cosmic whisper once the song climaxes, fading out on the lonely beep of the cash register. It’s heavy-handed, sure, but like virtually all of his work, Springsteen sells it with his delivery, reminding the listener that he always has and will continue to believe in the characters and ideals found in his rich stories.

If it weren’t for this career-defining sincerity, unabashedly optimistic songs like “My Lucky Day” and the embarrassingly named title track would most likely fail. Although they’re both E Street standards musically (Clarence Clemons’ ripping curbside saxophone solo on “My Lucky Day” will have you rooting for his cringe-inducing handclapping on the “Dancing In The Dark” video), lyrically they both teeter on being schmaltzy. It might take some listeners a few spins to warm up to phrases like “my hands are rough from working on a dream,” but Gary Tallent’s crack bass playing and the sunny catch of the chorus make it a lot easier, not to mention that part of being a Springsteen fan is buying into his delivery with all of its idealistic fervor. Some of The Boss’ lyrics only work because they come from him, and that’s what makes him The Boss. There’s no bullshit factor. Even the most cold-hearted skeptic can’t deny that he believes in every word he says.

The only time Springsteen’s lack of restraint fails him is on “Kingdom Of Days”. Saddled by the vague metaphor of the title and an overload of syrupy strings that drown out the rest of the band, the hookless track ends up sounding like the unmemorable theme song to a family sitcom. It’s the album’s only misstep and would have fared better as the bonus track instead of Academy Award reject “The Wrestler”, whose down on its luck, scratchy, acoustic meditation should have won it a place to such an otherwise full sounding album.

Elsewhere, Springsteen flexes his steel mill rock and roll grit on terse, gruff pop gems like “What Love Can Do.” At under three minutes, it’s the anti-“Jungleland”, a Stone Pony stomper shredded by Springsteen’s screeching harmonica and the dual-bladed buzzaw of Nils Lofgren’s and Steven Van Zandt’s grimy guitar work. Genres get stretched then compacted even further on “Good Eye”, a prairie-rolling desert blues ditty that puts every Southern instrument under the sun into a rusty blender before spitting it back out, the whole thing dripping with banjo, jaw harp, and the distortion of Springsteen’s layered, rough vocals that finally succeed in achieving the age appropriate Tom Waits gravel he’s been shooting for on his past few albums.

He keeps it more traditional on “Tomorrow Never Knows”, a sleepy honky tonk gaze on a prosperous valley with slide guitar and dusky vocals (both Springsteen’s and his wife/backing singer Patti Scialfa’s) that allow the song to remain simple and beautiful without ever trying too hard. It’s Springsteen’s answer to Roy Rogers; a lazy trot into the sunset that never sounds corny.

The sun quickly blackens on “Life Itself”, a paranoid cry to a loved one as the valley becomes darkened with wine and “the wind in the black elms.” Creeping with macabre poetry, the song is deathly afraid without giving up, deepening the swarming river of Western imagery that Springsteen often revisits with his newest collection of songs.

But the album’s most heartbreaking croon is closer “The Last Carnival”, Springsteen’s eulogy to Federici, who died from melanoma last year. Depicting the final days of a traveling big top, it’s the tragic sequel to “Wild Billy’s Circus Story” from 1973’s The Wild, The Innocent & The E Street Shuffle, describing the title character’s disappearance among the various performers sadly taking down their tents. “Sun down, sun down. Empty are the fairgrounds. Where are you now, handsome Billy?” asks Springsteen among yearning fingerplucking that transforms into the soulful choir of Federici’s former bandmates. It’s a bittersweet way to end the album, a somewhat mournful celebration of one of Springsteen’s oldest friends.

With everything that goes on (both musically and lyrically) during the overflow storytelling of Working On A Dream, the album will undoubtedly receive some flak for being too melodramatic, overproduced, and overreaching. But those are characteristics that have defined some of Springsteen’s best albums to date.  Like the fifteen plus guitar tracks on Born To Run or the passionate soap opera stories of the behemoth The River, the best way to enjoy Working On A Dream is to hand over your heart, soul, and ears to Springsteen’s musical faith. Climb on to your pony, hop on to your Harley, or strap yourself in to your Thunderbird and let his songs propel you into the painted sunset of the Jersey shore.