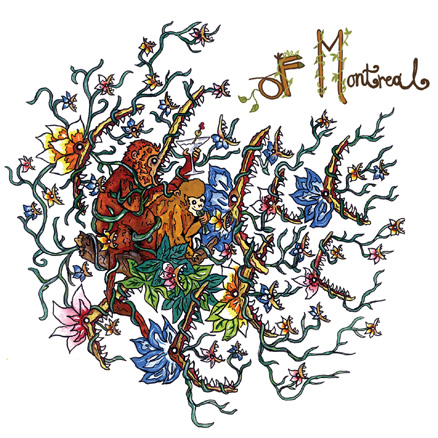 Your average producer isn’t a household name, or really any sort of celebrity outside of music industry insiders. Celebrity producers-think Phil Spector (sans murder trial), Rick Rubin, Sam Phillips, Timbaland-don’t come along very often. Whether or not that’s a good or bad thing, I’m not sure. Some producers make a name by working with artists who end up being carbon copies of their trademark sound. Others are famous for bringing out unexpected talents from an artist.

Jon Brion falls somewhere between these two extremes: Everyone he produces ends up making some of their best work, but they also have a newfound quirkiness that only he can bring. For example, Fiona Apple’s When the Pawn… is an amazing album, but his handiwork is as prominent on it as her vocals. And because he works with artists who have their own cult following and stay on the fringe of the mainstream-Apple, Aimee Mann, Rufus Wainwright-he’s earned his own following.

Perhaps it is no surprise that Georgian band Of Montreal picked Brion to remix two Skeletal Lamping tracks and decided to name the resulting EP for him. Brion, a respected musician in his own right, has a tendency to respect an artist’s uniqueness while still leaving his mark. The resulting Jon Brion Remix EP is a 24-minute jaunt through the frontman Kevin Barnes’ hormonal psyche, which seems to be his modus operandi these days. The five EP tracks are two reworkings of “An Eluardian Instance” and three of “Gallery Piece”, both two of the most commercial tracks on the album. Well, commercial if American radio let you speak bluntly about sexuality instead of veiling it behind glossy pop stars.

The first track is entitled “First Time High (Reconstructionist Remix of ‘An Eluardian Instance’)”, and for the most part it is just that. Barnes’ tale of meeting a lover in Sweden originally begins with a sweet memory that flashes further back to their initial encounter before twisting into a defeated kiss-off. Here, Brion transposes two verses so that the narrative becomes chronological and removes the closing dismissal altogether so that the song is sweeter. Combine the acoustic guitar that permeates the remix and amplified vocals, and Brion successfully finds the smile behind Barnes’ running mascara. The repeated line, “Do you remember our last summer as independents?” feels more hopeful than bittersweet, as it comes across the album.

The next track, an acoustic take on the same song, undergoes the same reorganization, only it’s as stripped down as the name implies. You can imagine the band throwing this together in a studio, surprising themselves with how well it works unplugged.

That remix is so good that Brion decided to put it on again-only as an unabridged 8-minute track with its own instrumental breakdown midway through. Where I find most dance reworkings of pop songs too repetitive for their own good, this extended cut has more care than the average remix. For the final five minutes that are Barnes-free, I didn’t miss him much. The final track is simply an instrumental version of the shorter “Gallery Piece (JB Remix)”, which is nice enough, although it feels unnecessary.

I was surprised to find myself engrossed with an EP, especially seeing as it is comprised of two songs (and I don’t think they’re the strongest of the album). Brion integrates nicely into the band’s sound and wouldn’t be out of place as a producer of their next album. I question whether or not this EP needed to exist as one disk rather than as separate b-sides for the respective tracks, but it’s a nice addition to their discography.