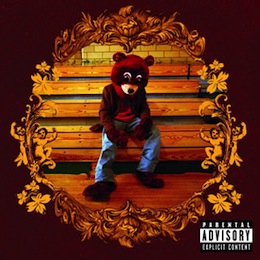 The first time I heard The College Dropout in its entirety was in the spring of 2004, a couple months after it was released. Sure, I’d heard the radio hits and I was familiar with some of his work as a producer. But I didn’t actually sit down and listen to the album until the tail end of an epic cross-country road trip. It was about five in the morning, the sun was threatening to rise, and I was crammed into the backseat of a small car for the two-hour drive back from a casino. As I faded in and out of the best type of sleep that could have been expected under the circumstances, two thoughts crossed my mind:

2. I think this album is going to change my life.

On my next trip to Best Buy I picked up the album. I don’t think it left my car stereo all summer. When I think of the summer of ’04 I think about cruising around town, windows down, pretending to be looking for a job but really just screaming out, “Drug dealing just to get by / Stack your money till it gets sky high!”

After reading that last paragraph I realize that it could be interpreted that I somehow related my post-undergrad unemployment to Dropout‘s themes of financial frustration. I’m not that naÃ¯ve. I wasn’t being insulted by a moderately racist employer at the Gap or hustling on the side to make ends meet. I was half-assedly searching for a job in a field I no longer cared to work in. I kept the album in my car stereo because, plain and simple, it sounded great with the windows down on an 80-degree day. It was hook heavy, the beats were fun, and the words were easy to memorize and rap along with.

This alone represented a change in the way I listened to music. I spent my college days as a bit of a music snob, especially when it came to rap. And yet here I was cruising around blasting the all-everything, radio-dominating College Dropout, with its cavalcade of hit singles and videos. I would exclude this as an irrelevant personal anecdote, except I don’t think it’s just me.

The College Dropout revolutionized the genre. Kanye West put Mos Def and Freeway on a track together.  Shortly after featuring the underground’s socially conscious royalty, Talib Kweli and Common, on a track about weed and girls, he did a song with Ludacris. Kanye West, through use of his extensive network of connections, succeeded in bringing together mainstream and underground rap in a way that had never been done before.

The College Dropout was one of the catalysts in a perfect storm that catapulted so-called “underground” rappers into the public’s consciousness. Mos Def, Talib Kweli, Common, the Roots, and others, already legends amongst hip hop heads, were suddenly names that even the most casual listeners were familiar with. To be sure, this was not all Kanye’s doing. Socially conscious hip hop also got a big boost from Dave Chappelle, who featured several underground rappers on his show (including a couple in tandem with West.)  And of course the movement got a big boost from the new ways the public was consuming music. No longer was significant radio play the sole measure of an artist’s commercial viability. It all added up to a changing hip hop scene, and Kanye West was a poster boy for this new generation.

The seemingly competing values of mainstream and underground hip hop were brought together in The College Dropout‘s lyrical themes. Kanye declared himself “the first rapper with a Benz and a backpack” and that was pretty much as accurate a description as anybody has ever made about him. The inner struggle between positive community building and the trappings of wealth is a common theme in rap, causing the genre’s critics to label artists hypocrites. But those of us who love hip hop recognize this struggle for what it is: proof of humanity. Who among us is not conflicted between our positive intentions and our desires for carnal pleasure? Being in the public eye does nothing to erase an artist’s humanity, and Kanye West embraces that humanity on Dropout.

West is definitely not the first rapper whose inner struggles have resulted in intriguing art. But he is quite possibly the first mainstream rapper with the self-awareness to recognize his limitations and openly acknowledge them on record. On “Breathe In, Breathe Out” he claims, “Always said if I rapped I’d say something significant / But now I’m rappin’ ‘bout money, hoes, and rims again.” On “All Falls Down”, after a stinging indictment of a superficial lifestyle, he admits, “I ain’t even gonna act holier than thou / Cause fuck it, I went to Jacob with 25 thou.” Most famously, this inner dialogue takes a spiritual bent on “Jesus Walks”.

On one hand, “Jesus Walks” was overrated. Critics hailed it for its unabashed religious content in the seemingly godless world of mainstream hip hop. This is baloney. Anyone who gives anything more than a passing listen to rap knows that the genre is inundated with openly religious sentiment. Rappers exhibit little shame in addressing their religious beliefs, be it openly at award ceremonies or more subtly in the repentant themes of many songs. Kanye took it a step further, penning a mega-hit that mashed award show level fervor with a much more introspective spirituality. He doesn’t just sneak a few mentions of God into an otherwise secular album. He delivers a straight-up gospel banger. But even this song is injected with his typical feelings of regret and remorse: “I want to talk to God but I’m afraid cause we ain’t spoke in so long.”

Kanye West also came under some minor scrutiny for his take on education. To an extent, this criticism is legit; the uselessness of higher education is not exactly the type of message our society should want to instill in youth of any economic class. But despite the fact that he is a role model by default, Kanye’s obligation as an artist is not to candy coat his message for any teenagers that may be listening.  His job is to reflect the world as he sees it, and on this album he speaks for a large segment of the population whose voice is not often heard.

Millions of American students are the victims of educational inequality. Culturally insensitive curricula render school meaningless in the eyes of these students. “They trying to put us on the school bus with the space for the wheelchair” is a rallying cry for kids whose cultural differences or lack of opportunities have been mislabeled as disabilities. Other students, through no fault of the educational system, simply cannot find the motivation for the classroom in the face of a more pressing home situation. Kanye’s educational themes are an indictment of what Dead Prez referred to as “They Schools”, though where the Florida duo attacked the issue with rage and from a purely racial standpoint, West worked with more subtlety, softening the message and adapting it for a wider audience.

Do flaws in our educational system warrant a call for dropping out? Of course not. Kanye’s lyrical themes should not always be interpreted in their most literal sense. This goes without saying in almost every art form.  Yet for some reason, rap seems to be held to a different standard in this area. Regardless, Kanye’s lyrics speak for a diverse group of humans that crosses racial and economic lines.

Kanye West’s accessible lyrical themes – along with his increasingly ambitious music – have catapulted him to superstardom. Along the way he has opened the door for up-and-comers like Lupe Fiasco and Rhymefest and altered the hip hop landscape to the point where guys like T.I. and Lil Wayne, among the biggest rappers in the world, have no fear to embrace their emotions and make music that is both raw and introspective. Kanye continues to push rap forward, achieving crossover success that gives the genre more and more legitimacy, hip hop heads will increasingly recognize The College Dropout for what it is: one of the most influential albums in the history of rap.