The Decemberists – The Hazards of Love 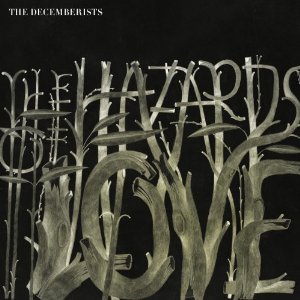 By this point in The Decemberists‘ career, you know what you’re getting with their releases: epic narratives that work better as whole albums than individual singles. That’s not to say they don’t write catchy tunes that stand on their own, for they most certainly do, but the band takes great pains to present sweeping stories that begin with the first note and end with the last, so you’d be foolish to ignore the intent. Of course, if you hate sweeping tales that invoke mythology and fantasy, you’re not going to find much to like in much of The Decemberists’ catalog-especially the latest release, The Hazards of Love.

On The Crane Wife, the band’s previous LP, songs varied between conventional acoustic rock tracks-such as the standouts “The Crane Wife 3” and “The Perfect Crime 2”-and indie epics-“The Crane Wife 1 and 2”-in order to describe a Japanese tale of heartbreak and unconditional love. Although that was the Portland-based band’s first big label release, it proved that they could keep their literate, albeit esoteric, style and make it accessible to a wide audience.

Hazards of Love doesn’t have tracks that cross into double-digit running times, but it does have a story so involved you need a Playbill to follow it. What you need to know is that Margaret falls in love with a supernatural being in the forest, but the forest queen is none too pleased. Meanwhile The Rake, who killed his own children, kidnaps Margaret in order to kill her. You have star-crossed lovers, a valiant hero, a damsel in distress, two villains, and a creepy children’s chorus. Broadway wishes it had something this engrossing.

The key to Hazards of Love is that you don’t have to understand any of this to appreciate the album; it’s just a rich bonus. Listen to “The Wanting Comes in Waves/Repaid”, the album’s strongest track and one of the most intriguing I’ve heard in 2009. Shara Warden (aka My Brightest Diamond) voices the forest queen and interjects her objections to the love between the forest dweller (lead vocalist Colin Meloy) and Margaret (sung by Becky Stark, aka Lavender Diamond). Warden steals the show with her vindictive growl, operatic trills, and a fierce guitar riff. In fact, Warden’s a stellar live performer who often sounds muted on her own albums, but here she’s as loose as any concert she’s given. With a sneering maternal tone she explains to the forest dweller how she found him as a child and raised him, and in a beat becomes a venomous mother defending her family. It’s a drama that wasn’t on The Crane Wife and certainly not found during the band’s sea chantey days.

The album’s title track is actually four different songs, each one a variation of the same melody, and listening to just these tracks gives you a hint of the album’s scope. Whereas the first two have a more conventional orchestral pop sound, the final two are the strongest. “The Hazards of Love 3” is a winding harpsichord tune performed by a children’s choir, which seems to represent The Rake’s children (presumably deceased). Where Warden’s vocals seared, the children’s words haunt, and some verses are punctuated with synth loops and circus melodies so that the sinister feeling comes from tension between vocal style and music.

The final track, “The Hazards of Love 4”, doesn’t just wrap up the story, it crosses into the country territory, a place earlier tracks only tease but never fully explore. Although it’s initially jarring, it’s a sensible conclusion to the preceding 16 tracks that consist of so much drama and theatrics. “These hazards of love / never more will trouble us” serves as the albums happily-ever-after when sung over sliding guitar and is the last statement you hear.

The Hazards of Love has the potential to alienate many listeners, but anyone turned off by the band’s quirks probably haven’t had much success with any of the band’s output. While this is decidedly The Decemberists’ album, they do relinquish much of the running time to guest vocalists, which might not sit well with anyone wanting to hear only the band. Unlike many contemporary concept albums and rock operas (whichever title best suits this LP), the narrative doesn’t harm the sequencing, the running time, or the quality of any song. When the extra layers are assets instead of hindrances, you know the band succeeded in its execution.