PJ Harvey and John Parish – A Woman A Man Walked By 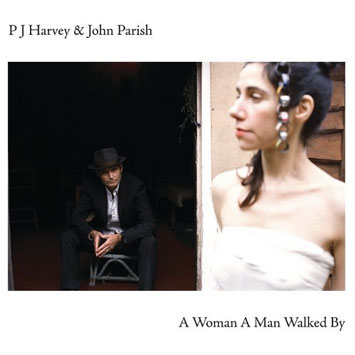 PJ Harvey‘s To Bring You My Love was one of those albums that every alternative rock fan owned in 1995. Her previous albums demonstrated she was a serious rocker to be reckoned with. On To Bring You My Love she proved she was going to do the rocking on her own terms. Whereas the album’s predecessors were more or less straight up electric guitar howlers, this one was as much an ax grinder as it was a brooding love letter. She hopped genres and toyed with song structure in a way she hadn’t previously. The album was a critical and commercial success, as was the accompanying tour.

What’s a rock darling to do for a follow-up? Collaborate with fellow Brit rocker John Parish on an album and share the billing with him, if you’re Harvey. She wrote the lyrics and performed the vocals, while Parish handled the music. The result was 1996’s Dance Hall at Louse Point, a record that found critics and fans receptive, if not confused. The album was well received by critics but went largely unnoticed by most fans. Not surprising considering the sound of the album, which held onto both artists’ rock past but also veered into something cerebral as the two musicians created their own intimate world without regard for commercial viability. Today, most fans consider the album an overlooked gem that deserves a second chance.

Thirteen years later it seems they might get their wish. Harvey’s responsible for one of the most lauded catalogs of the last two decades, with each release being different from her others. Now established as someone to watch, she’s once again collaborated with Parish for A Woman A Man Walked By, with songwriting and performance responsibilities once again divided between the two artists.

The lead single and opening track, “Black Hearted Love”, is the most conventional alternative rock tune on the album, but no weaker for it. If anything it makes the rest of the album easier to absorb because you’re sucked in with Parish’s smooth guitar riff and Harvey’s black widow voice. Harvey teases us, “And you are my black hearted love / In the rain in the evening, I will come again” before finally launching into the simple chorus nearly three minutes into the song. She announces, “I’d like to take you / I’d like to take you to a place I know / My black hearted” and you sort of want to go with her, even if you’re pretty sure you’ll never come back.

One of the more fascinating aspects of A Man A Woman Walked By is how some tracks sound as if they were plucked from earlier Harvey eras. “Sixteen, Fifteen, Fourteen” is kindred spirits to To Bring You My Love‘s “C’mon Billy” and the rickety piano on “Leaving California” and “The Soldier” fit on 2007’s White Chalk. The album doesn’t sound like a collection of Harvey’s b-sides by any means, but it does unearth an interesting aspect of the collaboration, which is that Parish appears to be a silent partner in the project. Yet, he might be the most influential component. With Harvey taking center stage with her lyrics and vocal theatrics, you can’t help but notice that the songs don’t sound all that different than something she could do on her own. Except she’d never release an album this disparate. Her releases are cohesive affairs.

Another example of two artists unleashed is “Pig Will Not”, which is what Diamanda Galas would sound like if she’d come down to this earth for a while. For the first minute, Harvey screams, “I will not / I will not / I will not” until she barks and transitions into a Milton-esque tale of fallen angels and love. The last time you heard her this demonic was on Dance Hall at Louse Point, when she scared the bejeesus out of listeners on “Taut”, a disturbing narrative about religion clashing with sexuality and burgeoning hormones set against Parish’s frantic guitar. Like that track, “Pig Will Not” is as much about the story as it is about making you cringe at the delivery.

A Woman A Man Walked By is an album between and for Harvey and Parish. It sounds like two artists allowing each other to do what they do best and indulge in the moment. Between the dearth of commercial tracks and scattershot sounds, I suspect the album would exist as it is even without any promise of it being released to the public, they’re that committed to the collaboration. That listeners get to hear these dark, confusing songs is a happy incident. With Harvey a bigger name than she once was, here’s hoping more people take notice of this release than their previous effort and that maybe that one gets rediscovered.