Neil Young – Fork in the Road 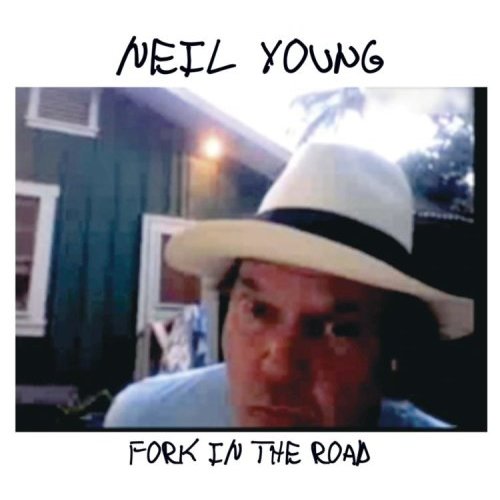 Neil Young lives his life by the hook of “Just Singing a Song”, the third track on his latest album, Fork in the Road. And he is right. As enjoyable as it may be, sitting in a drum circle and listening to Michael Franti isn’t actually going to save that planet. Ordinary people who want to make a difference have to do annoying stuff like using organic toilet paper and turning off the water while brushing their teeth. Or, if you are Neil Young, you can retool your 1959 Lincoln Continental into a fuel-efficient car and then sing songs about it.

Somehow, Young was actually able to pull off an album that is ridiculous as it sounds. One need look no further than “Fuel Line” to hear just how hilarious songs about alternative fuel can really be: “The awesome power of electricity/Stored for you in a giant battery/She don’t use much though, that’s smart for a car.”  I suppose Young probably isn’t the first environmentalist to refer to his car as “smart”, but he just may be the first to throw in the seemingly unnecessary disclaimer, “You know…for a car.”

And so it goes. Three songs on Fork in the Road have the word “road” in the title. There’s no metaphor here.  These are just flat out songs about a fuel-efficient vehicle. Sure, plenty of legitimate artists have written multiple songs about cars, from the Beach Boys to UGK. But as he has been so many times over the past four decades, Neil is in a class of his own, dedicating an entire concept album to the subject.

Thankfully the album is sonically sound. It’s not going to break much musical ground, but it’s another tight-sounding collection of heavily distorted rockers. The songs were enjoyable enough when I heard them for the first time at Young’s show last December. In fact, a case could be made that these songs are especially enjoyed in an arena setting where you can nod your head, smile, and play air guitar while the cavernous venue muffles any opportunity to decipher the laughably awful lyrics. Still, there is nothing here that really sets the songs apart from the rest of Young’s work, an inevitable side effect of forty years in the music business.  In fact, most of these songs sound like they have been released before, though they weren’t about cars last time.

For all the glaring absurdities of Fork in the Road, it really shouldn’t surprise or bother anybody. If you are a Neil Young fan, this kind of stuff just comes with the territory. Young’s immense catalog leaves us scratching our heads as much as nodding them. For every Harvest there is a handful of stuff like Trans or Fork in the Road. We may never want to listen to these records again, but a quick listen can remind us of why we love Young’s weird, quirky nature.

Neil wraps things up with the title track. The epic six-minute finale starts as sort of a “Roadhouse Blues” for old people, with Young embodying a pot-bellied trucker, but soon disintegrates into a mess of non-sequiturs and random thoughts about bail outs and beauty school. The highlight of the song is probably this gem of a verse: “About this year/We salute the troops/They’re all still there/In a fucking war/Whose idea was that anyway?” It’s a sloppy rant that never quite gets to the point. It’s also probably the best song on the album for an eccentric 63-year-old artist who made a career of turning rambling messes into intriguing music.