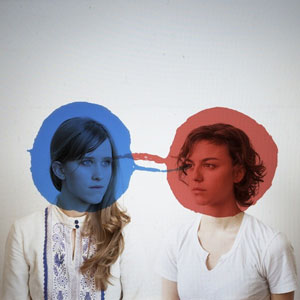 Over the past few years, I’ve known the album I’d call the best of the year the first time I heard it. Last year it was Man Man’s Rabbit Habits. 2007 resulted in Tears of the Valedictorian by Frog Eyes, and Joanna Newsom’s Ys hooked me the year before that. This year, it’s the Dirty Projectors’ Bitte Orca, featuring Amber Coffman and Angel Deradoorian. From its sharp cover to the very last note, the record never hits a dull moment.

Opening track “Cannibal Resource” kicks off with the trademarked loopy guitar, which frontman Dave Longstreth has fueled his career with. The guitar slinks around lithely before the rest of the band kicks in, complete with another Projectors trademark: lilting, wordless, catapulting backing vocals, belted out by bassist/keyboardist Deradoorian and guitarist Coffman.

The opening line of “Temecula Sunrise” suggests California expanses, as opposed to the band’s Manhattan home: “I live in a new construction home, I live on the strip behind the dealership, yeah”. But that’s always been Longstreth’s lyrical M.O. Instead of cramped, claustrophobic city-scapes, his mind’s out in the bright, golden outdoors. The concept album Getty Address is largely set on the outskirts of society. Multiple songs in the band’s catalogue reference beaches, cliffs and finches.

Longstreth’s voice climbs through the song like one of his beloved finches, soaring, catching air and following it majestically. Two tracks later, though, another vocalist comes to the fore. “Stillness is the Move” features Amber Coffman on lead vocals, the first pure lead she’s been given as a member of the group. For years, Longstreth has mentioned his appreciation of Mariah Carey, but this is the first song that whole-heartedly seems inspired by her. The staccato, trilled guitar line and radio-ready drum beat set up perfectly for Coffman, as her serenely confident vocals prove an amazing counterpoint to Longstreth’s howl. The track wouldn’t seem out of place on modern R&B radio, and I mean that in the best possible way.

What’s less fair than two astounding vocalists putting in time for one group? Three astounding vocalists working for the same group. Angel Deradoorian (who will release her debut solo EP “Mind Raft” on May 5, the same day as “Stillness” is released as the first single from Bitte Orca) takes the lead on “Two Doves”, a melancholy track that includes an orchestra backing a swift, finger picked guitar line. However, much like Coffman’s lead, this song can be looked at as Deradoorian’s introduction to the limelight. Her rich, full vocals perfectly balance with the string section, the lyrics of a failing relationship deep and haunting.

The album title, while I still have no idea of its meaning, blasts into focus in the middle of “Useful Chamber”. The guitars suddenly grunge and speed up, as a doubled, distorted track of Longstreth’s vocals repeats the title back and forth.

Where a lot of albums would begin to lose steam after such a stellar start, Bitte Orca only charges forward. Another pop-friendly drumbeat opens “No Intention”, complete with handclaps. This, paired with the three vocalists’ swooping in unison, and a compact, stumbling guitar line create a truly strong atmosphere that should win over listeners who weren’t sold on the sprawling, scattered songs Longstreth had been making for years. “You represent something unreal,” Longstreth howls, “but is that what you meant?” As usual, his voice is full, and his confusion is heartfelt, sincere and moving.

While his previous albums had their share of beautiful moments and impressive pieces, this album represents a developed strength in compact songwriting, an ability that should appeal to a bigger audience.“Remade Horizon”, one of the best tracks I’ve heard this year, is a perfect example of this. The quick, trippy guitar & vocal lines, the majestic howl of Longstreth’s melody, backed by Coffman and Deradoorian’s swoon-worthy vocals, the entrancing call-and-response chorus; it all adds up in a sublimely unusual and unusually sublime tune that should be a huge hit.

In the end, I’d be shocked if there were a better album to come out this year, unless it was the other album the Projectors have promised to release.