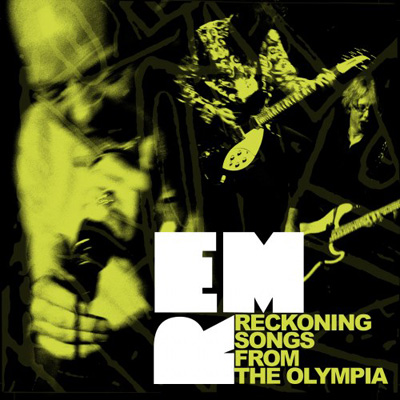 R.E.M. has certainly been busy these past five years. Since the fall of 2004, they’ve released two studio albums, their first live album, deluxe editions of their first two albums, and mounted two world tours (we won’t even get into the 1,000 side projects Peter Buck’s been involved in). We can now add another document to this period of time with Reckoning Songs from the Olympia, a sneak-peak EP for a future double-disc live album.

After an album both audiences and the band themselves were disappointed in, Around the Sun, R.E.M. had reached a crucial point in their careers. They weren’t communicating with each other as well as they had in the past, and the recording sessions had taken a hit in the process. It was decided that for the next album, they would work with a new producer (Jacknife Lee), record in Dublin, and see what would happen.

Thankfully, everything worked out. The sessions resulted in Accelerate, the band’s finest album in a decade. The road to that album took a route through what the band called “working rehearsals.” For five nights in late June/early July of 2007, the band played live “rehearsals” (A sign flashing “This is not a show” would appear during the performances) for crowds in Dublin’s Olympia Theatre.

Released to tie-in with the recently re-issued Reckoning, the new digital-EP consists of four songs from that album performed during the “rehearsals” (in case the title didn’t say it all). The selling point of this EP and the forthcoming Live at the Olympia are the song selections. We’ve heard “Losing My Religion”, “The One I Love”, and “Man on the Moon” a million times in the past 20 years. Many songs played at the rehearsals, however, hadn’t been played live in decades (the years in the upcoming parenthesis indicate the last time the song was performed).

“Harborcoat” (1987) sounds as good as it does on record, albeit with certain changes. Scott McCaughey has been adding guitar to recent R.E.M. albums and tours, and is always a welcome presence. The band seems to have found a permanent replacement for former drummer, Bill Berry, in former Ministry drummer, Bill Rieflin. Stipe’s obscured vocals are for the most part still-obscured, but the Mike Mills harmonies are in full-flight. One could believe it was rediscovering the magic of these earlier songs that inspired the band during the recording of “Accelerate”.

The next song of the EP is “Letter Never Sent” (1989), again with rich harmonies and featuring a reinvigorated Peter Buck on lead guitar. Stipe begins to laugh during the conclusion, indicating that the performances haven’t been given the Alive! treatment. Following that song is the same song that follows it on Reckoning, “Second Guessing” (l986). More of the familiar repeated verses ensue, with new harmonies from Mills for this live update. “Here we are!” indeed.

Closing out the festivities is “Pretty Persuasion”, a song Stipe describes not as a “family story”, but a “true story.” It is still impossible to understand every word Stipe sings on this track, a trademark of early R.E.M. One thing is made clear, however: Reckoning Songs from the Olympia provides insight into a band undergoing a rebirth, and Jacknife Lee’s live production leaves the listener awaiting Live at the Olympia this fall.