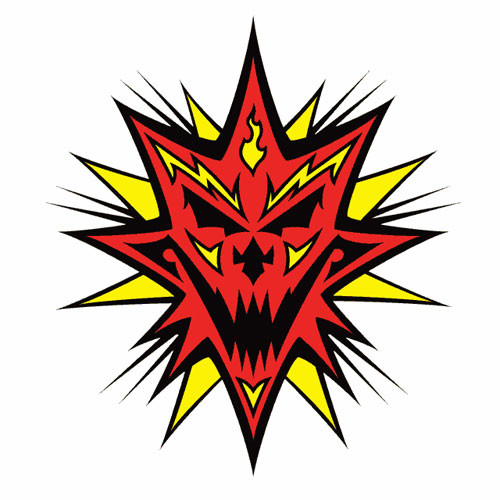 Fans and the lack thereof can make or break an artist, no matter the hype or negativity surrounding him/her. Psychopathic Records own Insane Clown Posse knows the benefits of fan dedication, despite numerous jabs at the label’s creativity and legitimacy in the music world, regardless of criticism directed at their taste or genre. Come several years since stronger fare like The Amazing Jeckel Brothers or Riddle Box, does ICP’s 11th studio album Bang! Pow! Boom! jar the world on a nuclear level, or is it the bomb in a bad, bad way?

During the advent of the Joker’s Card album series, which introduced a “dark carnival” as symbolism for purgatory, ICP’s biggest reign rested upon the late ’90s rap rock sound and diminished some even before this lengthy conceptual story arc ended on Shangri-La come 2002. The two rappers that form this devastating duo–Violent J and Shaggy 2 Dope–had high profile issues, including a beef with then-budding fellow Michiganite Eminem and splitting from Island Records. Fans (dubbed by the painted pair as “Juggalos”) remained ever loyal, but once the carnival saga concluded, ICP tried moving away from it with minimal success–illustrated by the disastrous sales and shunning of the much-delayed Tempest record.

Bang! Pow! Boom! is by and large a party on CD, with clean production courtesy of Mike E. Clark (Bizaar and Bizzar), generally uplifting tunes like “Juggalo Island” and nostalgic parody on “Chop Chop Slide”. Stand out tunes here include the universal message of vengeance on pedophiles in “To Catch A Predator”, poking fun at groupies on “Boing Boing”, and the anthemic call to arms of “In Yo’ Face”. Taking the signature ICP exaggerations about murder and animated corpses out of Bang! Pow! Boom!, no one could suspect this of being anything but club music and that, my friends, is an utter relief in some aspects, a letdown in few others.

From a twenty-something fan’s perspective, those who harp on wanting another dark record can honestly learn to grow up. The message conveyed by The Wraith was in fact a spiritually positive one, and while venting is necessary (and will probably come back in intervals during this next card run), detractors of B!P!B! who are complaining it’s too poppy are missing out on the inherent fun of it all. Bang! Pow! Boom! is not strictly for the fans, though should one look at this record from a Juggalo perspective, most will eat this whole release up no matter what critics or pissed-off adolescents tell them.

On the downside, ICP has never been able to write truly beautiful lyrics; “Miracles” tries to be such and winds up sounding like self-satire, though probably unintentionally. ICP has always had trouble expanding the fan base on their own terms, as typically word of mouth purists preach Carnival Of Carnage, The Amazing Jeckel Brothers, or The Tunnel Of Love EP at best, thus negating new material out of the gate. While it is well known amongst the duo’s brethren that nobody at Psychopathic gives a damn about the mainstream, it’s obvious ICP do at least want some fresh support based on Bizaar, Bizzar, and beyond. Bang! Pow! Boom! succeeds somewhat in emanating an “everyone’s welcome” atmosphere, whether this was purposeful or not.

We could argue all day long about the relevance of ICP during 2009, the attempt at making a record for dark carnies, and newcomers alike, which in this writer’s humble opinion was partially successful. We could debate for hours about who is more hardcore or what gimmicks this act is willing to take on, but there is nothing to be said that has not already been discussed at great length. It is one-third party record, one-third creep show, and one-third substituting substance for happy trails and funny skits, but for what ICP has always been Bang! Pow! Boom! cannot really be improved past its current incarnation.

All any clown could do at present is piss and moan over “Vera Lee”, rock out to “Vultures” and “Fonz Pond”, or simply putter about until the next card drops, and you know it’s coming. Bring out your Faygo!