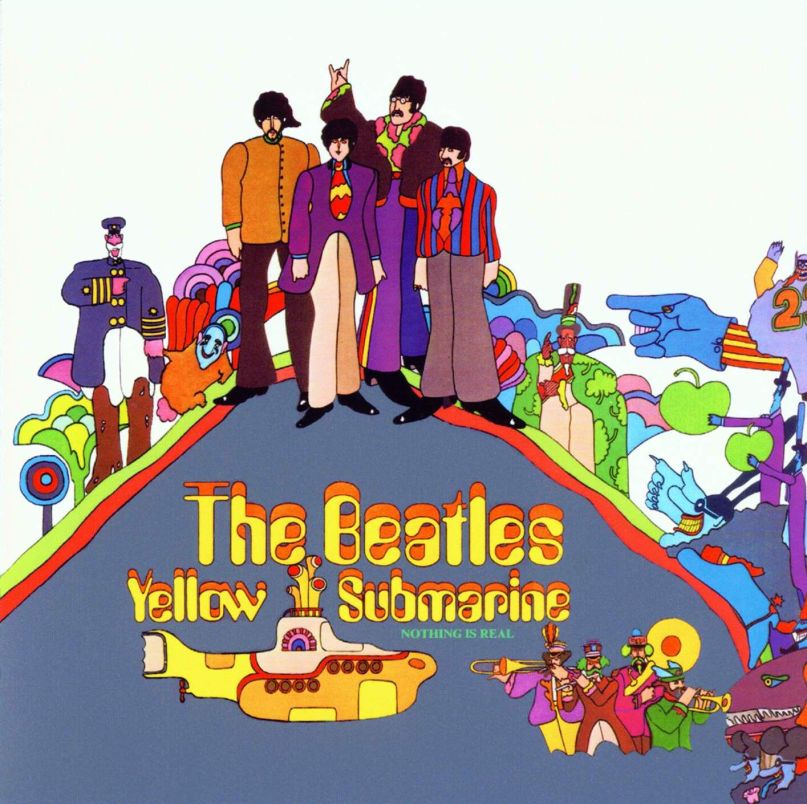 This is the part where we normally give readers a bold retrospective on a band’s career, perhaps some background on the record and why it does or does not entirely suck before cementing our arguments with wit and cunning lingo. But there is no reason to establish The Beatles. The Fab Four’s cultural impact during every transition in genre and appearance has been ogled (and now Google’d) tenfold.  Each studio release bears its own signature, even on remasters decades later, and the soundtrack to the 1968 acid trip of an animated film, Yellow Submarine, is no exception. Purists will tell you this record is The Beatles’ weakest effort overall, and unfortunately this is true — if you interpret “weak” to mean “different.”

Despite popular opinion, the movie Yellow Submarine is a considerable improvement over Magical Mystery Tour. Most would claim that unlike the soundtracks to Help!, Magical Mystery, or even Let It Be, Yellow Submarine does not hold steadfast as a standalone album, and this is where things get tricky on sheer perspective alone. Yellow Submarine‘s soundtrack is not a “play by play” collection of all the songs featured in the film. Whereas the film was the Beatles’  equivalent of Fantasia (animated portions set to music for the sake of showcasing music) that strung together some charming and whimsical plot points, the album seemed to represent Yellow Submarine as a serious project. Ironically, The Beatles’ characters on film are voiced by actors the whole time, and the band itself only cameos at the film’s conclusion — and in live action, no less.

Yellow Submarine‘s soundtrack arrived in 1969, and there were six actual Beatles tracks accompanying seven score tracks, thus covering three areas simultaneously: a soundtrack release as a whole, with an EP on Side One, and an atmospheric score/album for Side Two. This format was more applicable during Yellow Submarine‘s original release date, as it was printed to vinyl and allowed for separation by multiple sides, thereby reinforcing the sense of having two different records but still one complete album altogether. For the sake of arguing against detractors of Yellow Submarine as a legitimately good release in The Beatles repertoire, we shall focus on their contributions as a separate entity primarily.

Six tracks kick off with the former Revolver-song-turned-titular-track “Yellow Submarine”, which displays obvious Ringo Starr influences akin to Abbey Road‘s “Octopus’s Garden” much later on.  Everyone who has heard The Beatles knows of this tune along with its easily recited “child’s storybook” lyrics and infectious rhythm. It’s a song to easily sing along to, especially during travel (and it certainly beats “99 Bottles of Beer” any day). “Yellow Submarine” is the song on its namesake record that most people care to hear, along with “All You Need Is Love”, sealing a general consensus that Yellow Submarine is to The Beatles what St. Anger is to Metallica– the forgotten son in a slew of better recording.  The problem with that is too many have sold Yellow Submarine short on the basis of either not including enough new Beatles tunes in its track list or not caring in favor of more accessible and popular albums, and this article is here with fresh eyes and new angles to dispute conventions.

Given that “All You Need Is Love” and the title track cannot be called exclusive to Yellow Submarine, we now have four original songs and a score by composer George Martin. “Only A Northern Song” is lyrically the quintessential track, as it perfectly defines Yellow Submarine in two verses alone, while coming out sonically like a Pink Floyd b-side from the Obscured By Clouds sessions (that would be a compliment, folks):

Approaching “All Together Now”, we could call this song the intro that never was, but despite awkward placement, it borrows elements of early Beatles pop work while creating something both adults and kids can get into. It’s pure fun and carries not a single flaw, aside from its sequencing. The Lennon-penned “Hey Bulldog” is distinctively Beatles material, inheriting The White Album‘s “Ob-La-Di, Ob-La-Di” sensibility at first before transforming into something any number of new indie bands with a piano could claim inspiration from. The appropriate follower “It’s All Too Much” literally takes up where “Hey Bulldog” left off, making use of a cacophony of shakers and trumpets somehow coherently. “All You Need Is Love” concludes our Beatles segment, remixed for this record and remaining slightly distanced from its The Beatles (White Album) counterpart.

George Martin of Magical Mystery fame donates a score consisting of full orchestral arrangements in seven pieces, each titled for a scene in the film not accented solely by Beatles music: “Pepperland”, “Sea Of Time”, “Sea Of Holes”, “Sea Of Monsters”, “March Of The Meanies”, “Pepperland Laid Waste”, and “Yellow Submarine In Pepperland”.  Though every instrumental has a signature sound (“Sea Of Monsters” takes a Disney cartoon spin; “Pepperland” is most definitely an epic intro with bombast amidst the brass section), together they comprise a stellar score, which adds to the film… just not The Beatles. And while the music also feels much more dated than anything else here, it still manages to leave an impression. Again we note that this article has taken a liberty in calling the two halves of Yellow Submarine two separate records, in lieu of this being a review of The Beatles’ catalog and not George Martin’s.

Naysayers have their own reasons to why Yellow Submarine is a weak Beatles effort, and in some ways they might be right — after all, The Beatles only contributed six of 13 songs (two having been previously released). However, as a whole, Yellow Submarine is a delightful album, even if it’s still a less-than-acceptable inclusion in the Beatles canon. In its defense, every single Beatles track is solid and encompasses the listener with joy and chaos, quantity notwithstanding. If this were a review of solely the Beatles EP portion, four and a half stars could gloriously stud the page, which is what should matter. However, the soundtrack as a whole stands on a weighted three and a half, bogged down by a wonderful yet overbearing score that, with all due respect to Martin, should have been sold separately.

Yellow Submarine is not the red-headed stepchild; it just never had the disc space and necessary LSD to display its true colors. Our guess is that all went wasted toward the filming of Sgt. Pepper’s (perhaps the walrus ate it all).