Kid Cudi – The Man on the Moon: The End of Day 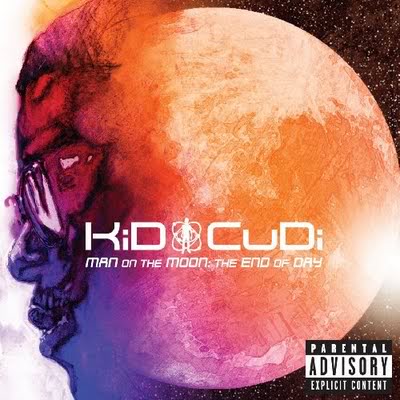 Cleveland born-and-bred rapper Kid Cudi kicked the hype machine into full blast with his mixtape A Kid Named Cudi in July of 2008. Since then, Mr. Solo Dolo has made studio magic with Kanye West, toured with Asher Roth, and stood in the sonic foxhole and engaged in verbal battle alongside Jay-Z. But with the release of his full length studio album, Man on the Moon: The End of Day, Cudi enters the do-or-die part of the show, a phase that has swallowed up many young MCs. Cudi seeks to expand upon the loneliness and deep emotional scars from his mixtape with cameos and production work by Common, Chip Tha Ripper, MGMT, and Ratatat. What we actually get is an album that feels half empty and with a disproportionate number of comparatively and relatively weak tracks.

This is not for a lack of talent. The album abounds with emotion, with its displays being enhanced within five acts (narrated epically by Common) that, at least in the mission statement, take Cudi from fevered nightmares to a bright and shiny new horizon. The emotion comes off authentic as Cudi yearns for the father-son connection he never got. But more than just detailed and complicated mourning, the heart-on-his-sleeve status puts Cudi in a league of his own, where other rappers (like the aforementioned greats of HOV and West) attempt to utilize to better their own album sales. This is an album where Cudi is caught between his own nightmares and insecurities and being the the baller that the hip-hop community expects him to be.

When Cudi does talk about bitches and being number one, his emotional weakness enhances the believability that he truly needs to be loved and well received, that being truly happy means conquering all. Rap can be a big pissing contest between grown men, and it seems they want to be on top because seemingly that is the point to being a rapper. Cudi demonstrates, unlike many of his peers, a resolve to take the scene back a few years and demonstrate a realness and a desire to be the best not because it’s hardwired into the culture but because he clearly has emotional issues to work out.

“Soundtrack 2 My Life” is the pinnacle of the concept and the absolute album standout. With lyrics like, “I got 99 problems and they all bitches/Wish I was Jigga man” and “Once upon a time nobody gave a fuck/It’s all said and done and my cocks been sucked/So now I’m in the cut, alcohol in the womb,” we get a taste of Cudi’s issues to the spacey rumble of a menacing drum and keys beat. And a lot of Cudi’s power is in his simplistic rhymes and his delivery; it’s no flow but a whole-hearted attempt at singing with a voice that shouldn’t and one that still comes off as genuine and more powerful than any lighting quick vocal pace. Cudi’s balancing act even takes a song like the Lady Gaga-sampling “Make Her Say”, which is nothing more than a three minute frat boy ode to oral sex and the album’s weakest track, seemingly have more depth within the context of the album.

Where the album seems to falter is that when there are genuine emotional experiences that overtake the listener in empathy (like the reaffirmation of his existence in “Heart of a Lion”), the songs are uninteresting production wise. The vast majority of the beats in the first nine tracks are indistinguishable. It isn’t until “Enter Galactic”, a funky extraterrestrial love jam, that sounds begin to stand out. What ensues is intelligent and diverse production work by MGMT and Ratatat on songs like “Alive” and “Pursuit of Happiness”.  “Alive” has faintly electro origins and this danceable guitar that is a living creature thrashing around periodically through the song. “Pursuit of Happiness” feels cutesy in parts with a simplistic piano part but washes over the song with Gospel quality during the chorus. But the problem with the second half is that the songs are emotionally devoid; “Pursuit of Happiness” is a bland middle finger to the world and how much of a bad boy Cudi is ’cause he drives drunk. Even if it were satire, it’d still be bad. Then, of course, there’s parts like the rather abrupt line of “Shut your outh or I’ll fuck it” from “Cudi Zone”. But the album’s worst line has to be “I want to kiss you on your space below your navel-ette/The place that you keep neat/So moist like a towelette”. And the sad part is that’s the best that tracks nine to 15 have to offer lyrically. We’re left with either pure rhythmic goodness or relevant and thoughtful lyrics; for much of this album, never the twain shall meet.

The last act of the album is called New Beginning; it consists of “Hyyerr”, which sounds like someone dragged the needle on an old Twista song, and “Up, Up, & Away”, where Cudi raps over something Blur might throw together (turns out this isn’t as good as it sounds). These two tracks do nothing to instill hope in a new sound. In fact, more of the aforementioned would be welcomed over these two pieces. If Man on the Moon: Ghost in the Machine and its unnamed followup, which will complete the trilogy, follows in their steps, Kid Cudi could find himself crashing back to Earth real soon.

Buy:
Man on the Moon: The End of Day