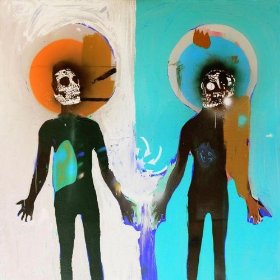 Glacial is the word that perhaps best describes the recording pace of Massive Attack. The average time between albums for the Bristol duo (Grant “Daddy G” Marshall and Robert “3D” Del Naja) is four years. But even by this standard, they’ve taken an inordinate amount of time to record the follow-up to 2003’s 100th Window. This time around, though, they’ve decided to give fans a taste of what’s to come in advance of releasing their next album (likely due some time in 2010), the four-song EP, Splitting the Atom. The tracks contain a sample of what’ll be on the new album, which is slated to feature a raft of guests, including Blur’s Damon Alburn, Guy Garvey of Elbow and former Tricky collaborator Martina Topley-Bird.

This brief collection contains all the hallmarks of classic Massive: ghostly vocals, behemoth bass, and crunchy sonic effects. On “Psyche,” the stunning collaboration with Topley-Bird, the marriage of the band’s atmospheric soundscape (loping percussion, dark synths) and the singer’s spooky vocals is breathtaking. It manages to exceed the inevitably high expectations accompanying the pairing of two trip-hop heavyweights. This is the song fans will obsess over – and one that’s bound to end up on more than a few film soundtracks.

At the opposite end of the spectrum is the EP’s title track, a churning dirge of a song that’s one of those hard-to-love-immediately MA songs. The beat plods as Daddy G and longtime band collaborator Horace Andy alternate verse and chorus (3D sing-speaks the bridge). The sound is pure drudgery, but this may be the point, as the song seems to be a resigned commentary on current sociopolitical issues (“the bankers have bailed,” “it’s all the same/we’ll never learn”). It’s definitely what one would call a grower.

More immediate is “Pray for Rain,” which features vocals from Tunde Adebimpe of TV on the Radio. The song is a mix of tribal drums, glitchy effects, and Adebimpe’s plaintive, soulful vocals. At the 4:20 mark, there’s a blissed-out breakdown chock full of the kinds of aural trickery that launched a thousand chillout compilations. The whole thing recalls the group’s work on their classic album Mezzanine.

Only the aimless knob twiddling of “Bulletproof Love” screams “album filler.” Overall though, on the evidence of this EP, Massive fans have much to look forward to on the group’s upcoming album. Now, if only the duo would just get the darned thing made…