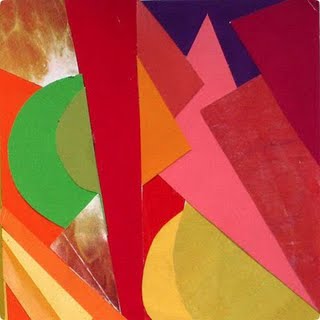 In case you missed the memo, people are really fond of the 80s. The present day is good, but if you can somehow make it allude to the DayGlo era, you’ve really achieved something. Although society seemed anxious to leave the poufy hair and shoulder pads behind when the 90s rolled around, we can’t seem to let that decade go. For every wristband and geometric-patterned tee you see at American Apparel, somewhere there’s a synthesizer dominating a new record.

Today that synthesizer is coursing through Neon Indian‘s debut LP Psychic Chasms. The project, which is primarily Alan Palomo (of VEGA fame) with the help of visual artist Alicia Scardetta, isn’t as glossy as you’d expect. Even if VEGA has a few rough production moments, it is mostly an accessible dance experience that’s as fun as its older brothers Cut Copy and LCD Soundsystem, though not quite as cerebral. Neon Indian is the younger, wide-eyed brother making music in the basement with equipment he found in some old boxes.

After the brief tune-up of “(AM)”, the opening notes of “Deadbeat Summer” sound like we stumbled onto the set of Solid Gold. The mix of soft keyboards and even softer drums cushion Palomo’s boy-band vocals as he sings, “All my dreams reminisce.” His voice sounds a bit muffled, but then again so does the entire album. It’s faux lo-fi through and through. Maybe it’s a style that’s worn out its welcome in most instances, but not this one. The false sense of low budget production can often come across as an excuse for flat arrangements and lazy songwriting. “Deadbeat Summer” is a perfect example of how to combine these elements to deliver a solid four minutes of carefree music.

Even in the sea of songs and arrangements plucked from two decades ago, the one you’ll leave humming is the bittersweet “Should Have Taken Acid With You”. Every boy has the moment when he realizes he realizes he missed out on true love (or, more commonly, sex), and “Should Have Taken Acid With You” is Palomo’s. Amidst a carousel keyboard melody and spaceship sound effects, he mumbles, “Should have taken acid with you/take our clothes off in the swimming pool/Should have taken acid with you/tell my parents that I’m staying with you.” It’s the kind of Hallmark card you’d send a girl the day after Coachella.

If the album has one weak spot, it’s that the DIY production can sometimes frustrate you. At any given moment, you’re listening to several electronic gadgets beep and hum, but the muffled presentation makes it difficult to pick apart the details. That’s undoubtedly part of the point and even the charm of Psychic Chasms, so you can’t complain too much. But when crisp, clean vocals emerge on “Mind, Drips” (which could easily be mistaken for a Fischerspooner demo), you realize how dulled the much of the album’s sound is and wonder what else you’re missing. Then again, if you’re that bothered by it, there’s always, well, VEGA.

Just when you think you’ve heard all you need to, the penultimate track gives a glimpse of what Palomo and company are capable of with the exciting “Ephemeral Artery”. It’s still lo-fi and synthtastic, except with even more science fiction. The laser noises and drum loops are looser, louder, and more rhythmic. Palomo’s distorted voice sometimes sounds like it’s busted your speakers. It’s a stark contrast to the haziness of “Deadbeat Summer”, but it leaves you thinking that the next Neon Indian release-fingers crossed-could be even better. Or at the very least just as fun.