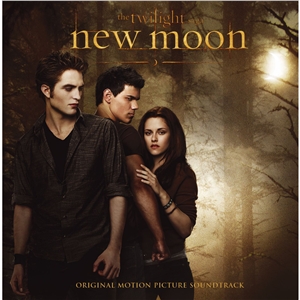 Before we get to the music, I’ll let it be known that I’ve neither read nor watched any of the Twilight series. Therefore, I plead ignorance if any substantive connection exists between Ben Gibbard and Bella. Though, I do admit that the soundtrack for The Twilight Saga: New Moon is good enough to make me considering ponying up the cash to see the flick to find out.

The New Moon soundtrack is a dour compilation. The most energetic song is titled “Monsters”, so you know pep is not the mood du jour. That said, the 15 tracks work together to feel like the gloomy, yet stylish world that today’s sexy vampires live in. Death Cab for Cutie’s “Meet Me On the Equinox” kicks off the album with the kind of angry passion that indie rockers are so good at belting out. It’s muted rock, a little emo, but still enjoyable.

The album takes flight when Thom Yorke’s dreary “Hearing Damage” arrives. It’s the collection’s best track, and that’s not a Radiohead-is-God assertion. Yorke continues a vibe he began with his solo release, The Eraser. A skittish drum loop weaves between his own background vocals fading in and out, his own study hum, and his main vocals. Without any other instrumentation, it would still make a beautifully layered song.

Lykke Li channels some of the more intimate moments of her short career on “Possibility”. It evokes the vulnerability she’s so good at cooing, just as she did in the simple “Time Flies” and “Tonight” off of last year’s Youth Novels. At five minutes, the locomotive rhythm and clunky piano borders on plodding, but the overall effect is so depressing that it works better than it should. The Dream Team collaboration of Bon Iver and St. Vincent for “Roslyn” isn’t the life-altering experience you might expect it to be, but it still works. Both artists harmonize so perfectly and sweetly that it feels like another Bon Iver release, with Annie Clarke’s voicing disappearing in the mix. On that note it’s disappointing because Clarke deserves the spotlight, but the result is such a melancholy marriage made in Heaven that it’s still a success.

Black Rebel Motorcycle Club’s “Done All Wrong” is a brief but outstanding acoustic number that drips with Dylan-influenced country. From the delicate plucks on the guitar to the howling harmonica, it sounds like it belongs on the soundtrack for a movie about hitchhiking in the desert, not lusting after teenage vampires.

The album’s weak spots are the more obvious grabs for Top 40 success. The aforementioned Hurricane Bells track “Monsters” is upbeat (well, in comparison to the rest of the songs) and catchy enough, but it just sounds generic. Muse’s “I Belong to You (New Moon Remix)” sounds like something Maroon 5 rejected.

Ultimately, what’s most interesting about the soundtrack is that separately, these songs wouldn’t stand out in most of these artists’ discographies. Collectively, they make sense. I’m reminded of the 1996 soundtrack to Baz Luhrmann’s Romeo + Juliet, where original tracks, b-sides, and album cuts from disparate acts were juxtaposed to form an interesting and mostly successful album that became associated with so many people’s youth. Twilight Saga: New Moon might not go down as a defining album that you forever associate with 2009, but it could be remembered as the coolest mix tape Hollywood’s put out in a long while.

Tag! You got another! Keep looking, though!