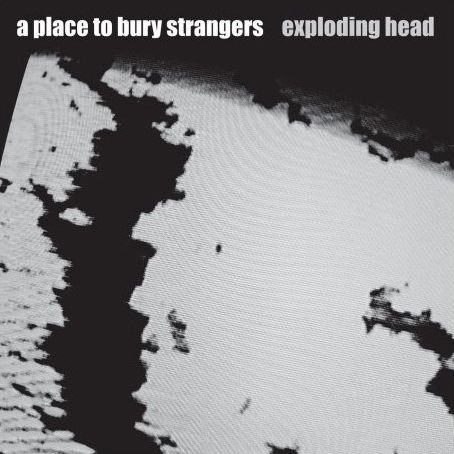 Every once in a while, the urge to search for new music creeps into the soul and without question beckons to bring those searching for said music to venture to the local record shop. With that being said, whether its divine intervention, fate or any of those other kooky titles to imply the present, sometimes you take a chance on a band that you’ve virtually never heard of. This case in point happened recently to me and my discovery of the excellent Brooklyn, New York shoegaze indie rock trio A Place To Bury Strangers. Without question, I decided to give it a go. Talk about a completely different expectation, Exploding Head is a flat-out masterpiece.

For starters, this is a LOUD record; loudness and virtually chock full of melody. Led by guitarist/vocalist Oliver Ackermann, A Place To Bury Strangers have built their reputation on chugging away at dissonant chords, intricate melodies and loud guitars. Oh, and it also doesn’t hurt they’ve also been labeled “the loudest band in New York.” Read that again. New York. That’s already a loud enough state in its own right. So there ya go, that’s a pretty dutiful honor, especially after the second record.

With all these compliments and commemoration floating around, Exploding Head cranks out with the infectious opener, “It Is Nothing.” Ackermann channels both Ireland legends My Bloody Valentine and English descendants The Jesus & Mary Chain in both his voice and guitars. Complete with off-center slides and echo-laden progressions, “It Is Nothing” takes no liberties and jumps right into a fast paced groove with no time to slow down. The rhythm section including bassist Jono Mofo and drummer Jay Space work very well behind Ackermann’s madness. As mentioned before, if you’re prepared for a LOUD record, then you’re seriously in luck.

The industrial-shoegaze tunes “In Your Heart” and “Lost Feeling” follow afterward and it is imminent at this point that slow tempos do not fit kindly with the band. Both of these cuts contain a wicked danceable tempo combined with bitter lyrics and a sardonic mood to cap it all off. Ackermann’s pseudo-British vocals also carry these tunes with fine precision. The production following these tunes is also a beckoning call back to the late 80’s with metallic drumming and gobs of reverb. To be frank, this is great stuff, but the best for this trio lies ahead in arguably the record’s two greatest compositions and nominations for my personal Songs Of The Year: “Deadbeat” and “Keep Slipping Away.”

With a spy-influenced punk snottiness, A Place To Bury Strangers launch into a sonic assault on “Deadbeat.” Ackermann’s tale of bitter love (Why?/What the fuck?/Don’t play with my mind) brilliantly shines over his guitars and Space’s drums add that sick punch to the throat that the composition needs too. Imagine this nonstop greatness for roughly four minutes. That’ll put a little more glide in your stride next time you walk down the street. The same can be said for the slower and much more melodic “Keep Slipping Away.” While not as powerful as its counterpart in “Deadbeat”, “Keep Slipping Away” contains a beautiful counter melody over Ackermann’s simple guitar progression. In essence, it’s pure beauty at its rawest; much like finding roses in the cracks of cement sidewalks.

The album then follows with more somber songs “Ego Death” (influenced greatly by The Magnetic Fields), the haunting “Smile When You Smile” and the fantastic finale “I Lived My Life To Stand In The Shadow Of Your Heart.” What A Place To Bury Strangers have sought to do is beyond awesome. While yes they follow in the footsteps of other great shoegazing artists that have come and gone since the early days of the genre’s inception, the New York trio throw a different spin on it and make it their own. With larger-than-life production values, simple minimalism woven into the music, and overall just an enjoyably dark record, Exploding Head gets my vote for record of the year. Just do it. Take work off (or wait till after five), and grab this record. You will seriously not regret it, and hey, the record store can benefit from some money in this economy. Share the wealth right? You bet.