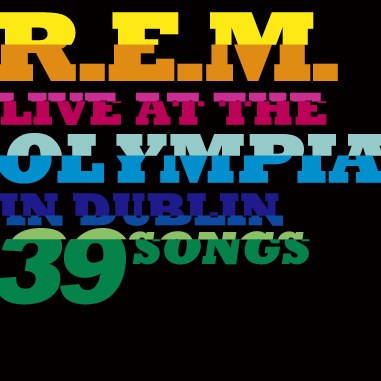 After two-plus years of YouTube videos and a teaser EP, R.E.M. has released Live at the Olympia. Singer Michael Stipe called it an “experiment in terror,” but after hearing the songs performed over the 5-night “working rehearsals” at Dublin, Ireland’s Olympia Theatre, the terror was for nothing. Live albums can be generic, but there isn’t anything generic about this release. Live at the Olympia is one of the best non-studio records released this year

The year was 2007. R.E.M. wasn’t happy with the recording sessions for 2004’s Around the Sun. For their new album, guitarist Peter Buck wanted to work in the studio at a faster pace, and Stipe and bassist Mike Mills agreed to do so. They convened in Ireland (with drummer Bill Rieflin and guitarist Scott McCaughey) and started working on what would become Accelerate, the best album from the band in years.

The band decided to road-test songs they were working on in an easier fashion: by not hitting the road. Instead, they played to audiences at the Olympia for a few nights in late June/early July. Many songs were so fresh, a laptop was placed at waist-level to assist Stipe in the performances. The laptop also helped Stipe recall songs written many years before, and these are the real reasons to own Live at the Olympia.

R.E.M. Live, the band’s first live album, had many of the band’s greatest hits as well as songs from Around the Sun. Most bands have at least one live record that compiles such material, with a deep cut tucked away at the tail end of the album. However, Live at the Olympia mostly consists of deep-cut material, and only 3 of the 39 tracks here appeared on R.E.M. Live.

As the show begins, Mills announces through a loud-speaker, “This is not show!” The band reminds the audience of this throughout. Stipe goes as far as apologizing in advance for what would be a performance of “Kohoutek” (which sounds just fine, by the way). Jacknife Lee produced Live at the Olympia (he also produced Accelerate) and isn’t afraid to leave in mistakes. There is a false start to “Disturbance at the Heron House” and Stipe completely forgetting the lyrics to “Drive”. This contrasts most live albums that tighten production and omit such flaws, but such flaws add to this production.

In addition to performing nine songs from what would be Accelerate (including a version of “Supernatural Superserious” called “Disguised”), the band introduces two songs that didn’t make the album. “Staring Down the Barrel of the Middle Distance” is great and could easily be mistaken for a song from New Adventures in Hi-Fi. Stipe seems proud of the other song, “On the Fly”, but sadly it could be mistaken for one of the misbegotten songs on Around the Sun. The audience response to “Man-Sized Wreath” prompted the band to include it on Accelerate despite telling the crowd it wouldn’t be appearing.

Other surprises include R.E.M.’s best song, Murmur’s “Sitting Still”, four of the five tracks from Chronic Town, an acoustic reworking of Reveal’s “I’ve Been High”, and an ultra-rare performance of Monster’s “Circus Envy”. There are many more songs to dive into, and only a few dampen the impact. “I’m Gonna DJ” kinda works on Accelerate, but here it lacks punch. The decision to include the worst R.E.M. song, “The Worst Joke Ever”, was the worst decision ever. Fortunately, when you have 39 songs to listen to, these songs are easy to skip.

Live at the Olympia is targeted at long-time fans of the band, but should also be used as an opportunity to introduce newbies to the band’s history. The band begins recording a new album this month, hopefully for release late next year. If the energy of Live at the Olympia is any indication, the band has a few more albums in them.