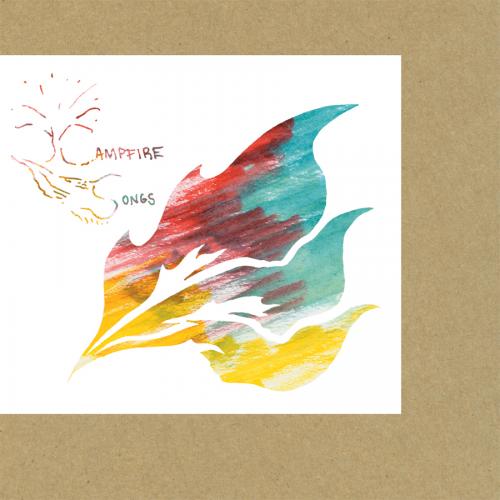 I sometimes wonder how new Animal Collective would get along with old Animal Collective. I’d wonder if they could pinpoint what changes they’d gone through, what new influences had slipped into the mix over the years. The Campfire Songs reissue, the first full album release post-Merriweather Post Pavilion distinctly sets a contrast between the group’s third record (set to Minidisc in 2001) and last year’s album, their eighth.

Campfire Songs, released under an eponymous alias, was recorded back when Animal Collective was a more fluid collective of the four band members. This release found Avey Tare (Dave Portner), Panda Bear (Noah Lennox) and Deakin (Josh Dibb) (sans Geologist) recording acoustic guitar and vocals on a screened-in  Maryland porch, complete with ambient noise and field recordings of the great outdoors. The sound of the record reflects this aesthetic recording choice: it’s warm, rich and extremely natural. In an interview with The Milk Factory, Lennox explained the band’s intention: “We wanted it to sound like a campfire feels and I think that also made us think of campfire songs that you can sing with a bunch of people and everybody gets connected and feels good and safe.” While tracks on MPP certainly share that same sense of camaraderie and warmth, the group’s use of acoustic instrumentation slowly became supplanted from hereon, losing a layer of that natural sound.

The highly woven, ten minute long “Queen In My Pictures” opens the record, a dreamy non-melody slipping in and out of focus until it eventually bursts into a clarity. The flowing, slippery bridge between that song and the phenomenal “Doggy” is breathtaking. The guitars churn and thrum with a sublime heat before the perfectly simple melody of the next track winds into place. “Doggy,” which was resurrected in live sets with an electronic bent on the MPP tour, is one of Animal Collective’s best songs. The song’s lyrics betray a melancholy, childlike sense of loss, after the death of a favorite dog. But, rather than being dramatic and one-note, the vocals seem to capture some of the lost joy, rather than mourn. The rocking chair strum of the guitars propels the song forward to a breaking point, where the chords break into falling strums and quietly clattering metal of some kind tumbles behind.

The loping, fingerpicked “Two Corvettes,” with its ethereal vocals leaves some of the heat behind, sounding somehow more like a mellow afternoon lying in the grass.  “Moo Rah Rah Rain” features whispered, moving vocals repeating the title sounds. The 16 minutes of material between these two songs likely aren’t for the “My Girls” Animal Collective fans, but do provide a hint as to the upcoming direction of Sung Tongs and Here Comes the Indian.

“De Soto De Son” is just as dreamy as anything else on the record, again employing a simple melody over simple guitar patterns to produce a cocoon-like feeling. And that really is what the entire record does. There are no singles, no pop melodies. It’s as much an experience as it is a record, from concept to completion. While the swirling, electronic bridges between songs on newer Animal Collective material sometimes do the same (think “For Reverend Green” to “Fireworks” on Strawberry Jam), but they haven’t as perfectly completed an encompassing experience like Campfire Songs.