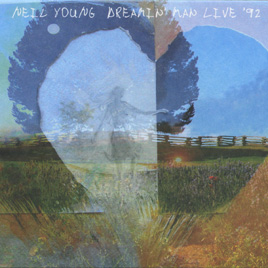 Stripped down. Organic. Real. Neil Young’s Dreamin’ Man gives everyone from the crazy-obsessed to the exploratory fan a fresh and positively bare version of Harvest Moon. The acoustic, live performances from different cities in ’92 will refresh the reason you loved the album the first time around.

Those who argue this album has nothing new to offer from Harvest Moon should take a deeper listen. The sound of Young’s fingers grazing the strings on “Hank to Hendrix” serves as an intimate homage to the song inspired by great guitar legends Jimi Hendrix and Hank Marvin (No, not Hank Williams). Other tracks sneak out that weren’t noticeable on the studio version. A surprisingly new-found appreciation for “Old King” and “Natural Beauty” leaves “Harvest Moon” somewhat unforgettable this time around.

The only question that remains is what’s next? We can only wait in anticipation…