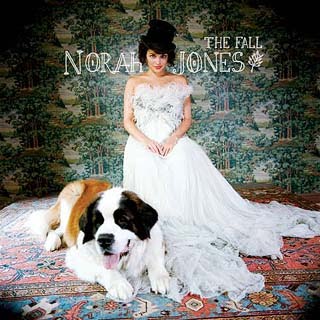 Remixes can often be dicey propositions. For some they’re unnecessary versions that dilute an original song’s power, and/or a way for record companies to milk fans for more cash. On the flip side, remixes offer a chance to hear a song in new, sometimes even inventive ways. Happily, Norah Jones’ new offering falls into the latter category.

On the heels of the release of Jones’ fourth album The Fall, Blue Note has released a five-song EP featuring remixes of the album’s lead single “Chasing Pirates”, and the non-album track “That’s What I Said”. The EP also includes the original version of the song, a lilting charmer firmly in the folky singer-songwriter persona the singer has honed since her 2002 debut Come Away With Me. The song is a playful meditation on the flood of thoughts that can keep you up at night (“My mind’s racing from chasing pirates”). But the two remixes of “Pirates” echo the more beat-centric tunes on The Fall.

The Droogs Remix comes courtesy of a remix collective that included, among others, rock/pop chameleon Beck. The remix is a dub-wise take on the song that transforms it into the kind of eerie lamentation you might hear at your favorite hookah bar. Jones’ vocals are fricasseed almost beyond recognition, while eerie sound effects carrying the song into truly sublime, blissed out territory.

On the Santigold and Snotty remix, a rumble of drums surrounds Jones as she sings in an impossibly low register. Stripped of most of its instrumentation, the previously winsome tune turns into a dirge-like stalker of a song.

Previously unreleased track “That’s What I Said” is at turns playful and reflective. A skittering drumbeat plays over Jones’ plaintive vocal and whimsical lyrics. A remix by Adrock and Mike D chops up the song then tosses in some jittery hip-hop beats; yet it maintains the song’s jaunty feel.

Clocking in at a lean 15 minutes, the Chasing Pirates EP is as much a teaser for the remixers as it is for Jones herself.