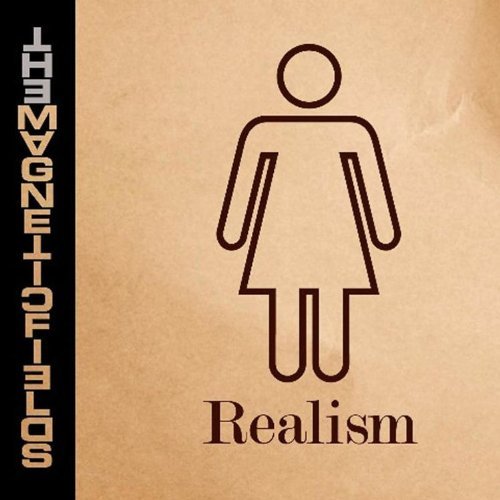 The Magnetic Fields have at long last returned with their followup to 2008’s Distortion. Their new album, Realism, serves as the polar opposite to that fuzzed-out guitar record. For the band’s tenth album, Stephin Merritt chose to record Realism with very little electric guitar, an abundance of strings, and acoustic instruments. The result is, obviously, a very stripped-down effort, which simply pleases more than it excites. However, there is enough here to warrant a recommendation.

The album’s strongest track, “You Must Be Out of Your Mind”, also serves as its first. The string section is essentially a re-do of an earlier Fields song called “I Don’t Believe You”, but Merritt’s lyrics save it from being known as just that. Merritt and company sing together, as a lover who is furious at someone who wants them back. “I want you crawling back to me/Down on your knees, yeah/Like an appendectomy/Sans anesthesia.” People will be hard-pressed to get the chorus out of their heads.

A few songs sound as though they’re straight out of an Andrew Lloyd Webber production, or a Decemberists album, which will obviously divide fans. “Interlude” is sung over music-box-esque instrumentation, “The moon blew rays of magical light” give you an idea of what you’re in for. But damned if the presentation of this song, as well as the similar “The Dolls’ Tea Party”, doesn’t sound good. There’s a lot happening here, with acoustic guitar, chimes, piano, organ, etc. Even the songs with simplistic lyrics seem to be recorded with great detail.

“We Are Having a Hootenanny” is a country-western ditty with saloon piano and choruses/verses that demand the listener sings along. It’s followed by the deliberate anti-climax of “I Don’t Know What to Say”, where the song trails off with no warning as the protagonist continues to make his case for amends. The first half of the album is a song that’s been heard for a few weeks now, “Everything is One Big Christmas Tree”, which is a nice effort.

The key word is nice though. It should be noted that “Christmas Tree”, along with “Walk a Lonely Road” and “Better Things”, would easily be lost in the shuffle on an earlier Fields effort. They aren’t bad songs per se, but they’re certainly disposable. “Painted Flower” is another tune that should have been a B-side, but due to the album’s already shortened length (Realism clocks in at under 34 minutes), it serves as padding.

The album finishes strong, however, with the penultimate track sounding straight out of an old episode of American Bandstand. “The Dada Song” shakes its hips and freezes its way into “From a Sinking Boat”, which features an understated, yet beautiful string section. But then the album is over before you know it.

A short album isn’t automatically an underwhelming album (see: Vampire Weekend’s youthful discography), and it’s always good to leave the audience wanting more. But when you leave the audience wanting much more, there is a problem. Realism is a pretty good album to round out The Magnetic Fields’ trilogy of “no synths allowed.” However, it leaves you wondering if the best songs here could have been coupled with the best songs from Distortion for a great, solid effort. But “I don’t know what to say/I don’t know what to say/I could try and shove you off the nearest cliff/I could say I love…”