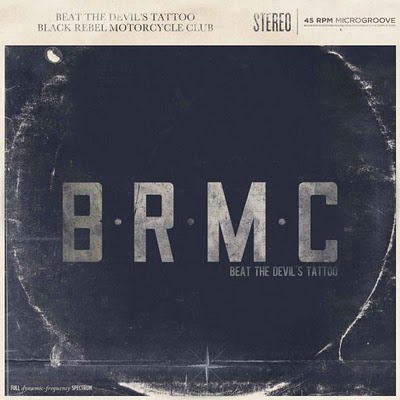 Watching a band grow and mature is a rare treat. Since their debut in 2001, the Black Rebel Motorcycle Club have grown up right in front of our eyes, from members of the garage rock revival to international superstars. But with their latest album, Beat The Devil’s Tattoo, the band present a mix of musical sleight of hand and a few beefy rock tracks.

Of the album’s 13 tracks, it’s easy to describe a chunk of them as gimmicks: inherently good songs that can be enjoyed but are created through some feat of surface-level awesomeness without a lot of sustainability. Whether it’s the psychedelic jam from a forgotten cut off of Black Sabbath that is “War Machine” or “Sweet Feeling”, the saccharine sweet jam of pure neo-psychedlic pop, there’s a very shallow flirtation with all things trippy. Of course, there’s also the interesting creations where guitars almost come to life. There’s a great kind of relationship between the wailing and dark guitar and the positive soaring boom of the jangly guitar rhythm in the Thin Lizzy-esque “Bad Blood”. “Beat The Devil’s Tattoo” is a down-home folk classic amped to hell; it’s a refreshing little device when a decidedly acoustic guitar slices through the modern trappings of the band. Sadly, those beasts don’t do much else other than peek the listener’s initial interest.

The album’s a struggle of too much experimentation versus not enough overall consistency. This is a band who has changed their sound before, and while it may not be as drastic as other shifts (as they’ve gotten more and more concise), they’ve lost some of that initial edge. They’re more technically sound then ever, but there’s less of that swagger than with material from, say, B.R.M.C. But even when they do offer some blasts from the past, it’s just not the same. “Conscience Killer” is this album’s “Whatever Happened To My Rock And Roll” in that it’s for older fans and recalls that simplified, rumbling guitar noise. But after further listens, it’s gotten kind of organized like something from a late ’90s U2: arena-ready rock with tons of fury and little long-term substance.

But the songs that do mean something do so because of the tiny choices the band has made. “Shadow’s Keeper” is like some grunge-heavy Seattle natives learning the basics of blues circa 1992. It’s also the first song to lose control musically, breaking down into a spiral of wailing guitar and heavy industrial noise. It highlights the importance of burning out into the musical oblivion: Do it every track, and we expect it; keep it a gift and it means more to us. “Evol” stands out because, in an album full of minimalized vocals where a lot is held back for seemingly no purpose, the singing especially sounds like it’s done from a deep, dank cave. It’s an example of their focus on sounds and instrumentation over vocals to create a battle where the guitars reign supreme and the vocals are that much creepier. “Long Way Down” is a solemn gospel song if done by Radiohead. Emotionally, it’s busy and is one of the more straight-up beautiful and traditional tracks on the album. Here, the effects and noise in the background add an other worldly presence to the song. But they don’t let it win, and the song dies to a lonely piano. That says a lot about the power of the musical add-ons in the band’s eyes. Despite their initial reading as even more tricks, these songs are representative of the power of the band when stripped to the very basics.

All of this isn’t to knock the natural development all artists go through; it has to happen, and we all hate when too much of the goodness is left behind. But if you loved BRMC because they were rough around the edges and things genuinely seemed messy and raw and real, you may feel just as defeated as El Diablo.