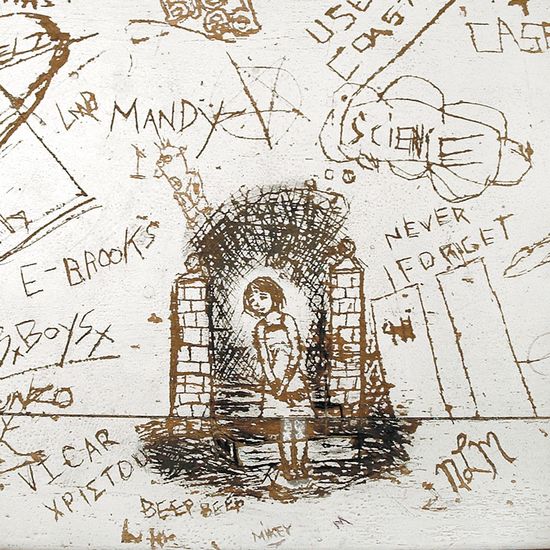 To quote Neva Dinova’s opening track from One Jug of Wine, Two Vessels, “I don’t wanna say it, though I know that it’s true, something you can’t get past, something I can’t past”: Jake Bellows, the lead singer of Dinova kind of sounds like Ryan Gosling on his Dead Man’s Bones album, but I mean that in a good way. Bellows has always impressed me with his vocal ability and continues to do so with the two new tracks he contributes to the album. Neva Dinova, unfortunately, are easily lost in the star-studded Omaha, Nebraska/Saddle Creek scene. When you think Saddle Creek, you more than likely think Bright Eyes, Rilo Kiley, The Faint, Cursive, or Land of Talk long before you think Neva Dinova, and that’s frankly kind of sad. Neva Dinova deserve more praise than they get. Jake Bellows’ unique vocal range is not only fascinating, but it’s one of a kind. Their style as a band is quite unique itself. Most of their back catalogue spans a vast folk, psychedelic, and rock feel with a heavy alt-country vibe throughout.

So, with regards to Dinova, the re-release of this split will be very beneficial to them as far as publicity goes. This particular split is fairly unique in that it is more of a collaboration than it is a split. Bright Eyes members provide the backing music for Neva Dinova, and vice versa. Conor Oberst even went as far as to write the closing track, “Spring Cleaning” for Neva Dinova and lets Jake Bellows take the reins. Oberst has noted that the initial recordings for these sessions back in 2004 were his favorite to participate in.

The consistency of their old material versus their new material is very straightforward and illustrates that they have stayed relatively true to their sound since 2004. Their standout 2010 track on this split, “Rollerskating”, demonstrates Bellows’ vocals exactly the same as on their 2004 “Spring Cleaning” track. It is a sound that is tight and contagious, and the split demonstrates that well.

From Bright Eyes’ perspective, they are not re-releasing it to get their name out there. They are a well established act with an extremely devoted following. But those familiar with Bright Eyes should not expect too much of the old from the two new tracks. Not that they aren’t worth listening to, they’re just not your average Bright Eyes. And as cool as it is to see that Bright Eyes isn’t, in fact, dead (as has been the rumor), these tracks mark an apparent shift in Oberst’s writing style.

He’s been a busy man since we last heard from his Bright Eyes project. One release under his given name, another under Conor Oberst & The Mystic Valley Band, and another under Monsters of Folk. And he’s also toured tirelessly for each of those albums. The affect those events have had on his songwriting are apparent on the two new tracks he debuts on this album. He bids farewell to the typical Bright Eyes sound and has embraced something closer to his Mystic Valley sound, for better or worse.

His four tracks on the album convey two different eras. Two brand new with the MVB alt-country sound, and the original two, the pre-I’m Wide Awake It’s Morning tracks. To hear them together is strange, but interesting because there’s such a stark contrast between the two. The tracks “I’ll Be Your Friend” and “Black Comedy” show a more youthful approach with a heavy emphasis on lyricism, as was his style at the time, whereas the new “Happy Accident” and “I Know You” focuses more on the cohesive folk and country sound before lyrics.

In essence, there are two things to take from this re-release. First, is that Neva Dinova is actively taking a deserved large step forward to becoming a household name and should not be ignored. Their sound is one that is original and impressive and deserves delving into. The second thing is that Bright Eyes are back! This is only positive affirmation that they might indeed, be appearing at this summer’s Lollapalooza.

It is worth a listen to hear from Neva Dinova and it brings a comforting nostalgia to hear another Bright Eyes track after so long. To close, I’ll use another quote from the album. This time from Bright Eye’s “I Know You”, concerning whether or not you will love this split eternally: “Oh I know you want to, I just don’t believe that you can.”