First Aid Kit – The Big Black and The Blue 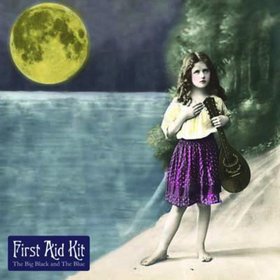 My first surface reactions to First Aid Kit and their debut LP, The Big Black and The Blue, were as follows: First, their name First Aid Kit sounds like it should be a screamo-warped-tour punk band. The band couldn’t be further from that description. The music contained on The Big Black and The Blue is folksy, O Brother, Where Art Thou? meets Fleet Foxes. Guitars, mandolins, banjos, tight harmonies drenched in reverb and echo…hardly time for electric guitars or screaming.

Second, the vocals contained on the LP and the lyrical content made me think the band was a couple of older girls who have been through some big shit in their lives. Some women who have been living in, perhaps, the southern part of the United States, being left with bruised hearts and arms from men leaving them, and now they have the power to sing songs about it. Then I did some research. Wait…wait wait…they aren’t from the South? Ok then. Then from somewhere equally rough and tumble. Sweden? They’re from Sweden? And they are teenagers? Seriously?

Answer: yes. First Aid Kit is made up of the fresh-faced Swedish sister duo Johanna & Klara SÃ¶derberg (ages 19 and 16 respectively). And here I thought that all Swedish music was angry (The Refused, et al) or weird and moody (The Knife, et al). Boy, was I wrong, because here come Johanna and Klara to rock my close-minded American sensibilities right out of the park. Their description of their music on their YouTube channel says, “We want our music to speak of bygone times and old souls. The emphasis is on narrative lyrics accompanying playful melodies with intense, dense harmonies.” Pretty grown up sounding for teens, but dead on when you hear them sing.

First Aid Kit made a name for themselves last year through their Drunken Trees EP, which included a bonus track of their cover of Fleet Foxes’ “Tiger Mountain Peasant Song”. Their pitch-on harmonies and production made them a perfect match for the Fleet Foxes tune, and The Big Black and The Blue will continue to draw comparisons to the harmonic-folk group.

The whole album consists of great musicianship and songwriting. The harmonies are tight and well put together. The lead single, “I Met Up With the King”, is one of the highlights here. It starts out with a light touch and speaks of meeting up with a man slowly dying, who is reassuring that he hasn’t changed, but then it builds with stories of broken love that all lead to an ending that accentuates Johanna’s growling harmonies over Klara’s light voice.

Another standout is the album’s second track, “Hard Believer”. With lyrics like “love is tough/time is rough/love is rough/time is rough on me,” you can see some of their age showing through. When they follow it up, however, with, “Well I see you got your bible/your delusion imagery/well I don’t need your eternity or your meaning to feel free/I just live cause I love to and that’s enough you see/so come preach about morality/that’s just human sense to me,” you can see their maturity-before-their-time shining bright and strong. The leading guitar and piano compliment the song perfectly and create a fantastic waltz for the lines to fit.

Overall, The Big Black and Blue was a big of a grower for me. At first, I equated it too closely to the Fleet Foxes (whom I’m not the biggest fan) and all the songs started to sound the same. Once I gave the album a few more listens, however, I realized how strong First Aid Kit is from a songwriting standpoint. I admit that the sisters’ ages had a deciding factor in how much I enjoyed the album. I am amazed at how mature the performances are for kids so young who, for all intents and purposes, haven’t been through a whole lot. Their ages shouldn’t matter, because the album as a whole is strong and well put together, but it adds another element of excitement when you do factor in the age. These cute Swedish girls have a long life ahead of them.