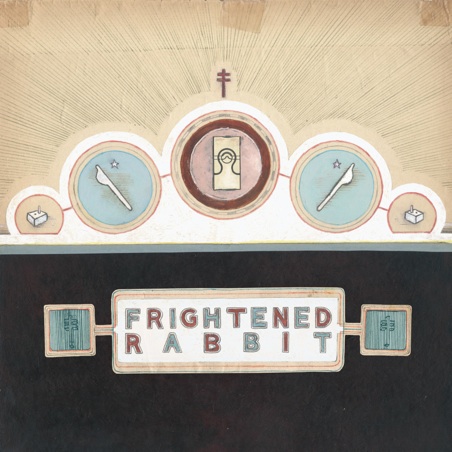 In 2008, sensitive Scottish rockers Frightened Rabbit released The Midnight Organ Flight, their critically acclaimed sophomore LP. Lead vocalist Scott Hutchison’s straightforward lyrics spelled out the joy, melancholy, confusion, and self-pity of relationships. The few times Hutchison invoked metaphors, he chose the grotesque rather than the picturesque. Standout track “The Modern Leper” found Hutchison comparing himself to a deteriorating leper incapable of love. Frightened Rabbit made no qualms about the many facets of love, and they made you want to sing along with them.

They continue that winning formula on their follow-up, the aptly titled The Winter of Mixed Drinks. Working once again with producer Peter Katis and now sporting a fifth member, Frightened Rabbit once again establishes itself as the U2 of indie rock. Almost every song relies on furious guitars and drums, slow builds, and irresistible choruses. “Things” kicks off the record with another grim bodily condition set to a rhythmic percussion that continues to build throughout the song without giving in to a complete release. The entire time we’re kept waiting for a breakout moment, but the tension reflects the song’s uneasy lyrics. Hutchison sings, “Shed my clothes, shed my flesh down to the bone, burn the rest.”

The album is best described as consistent for many reasons. The songwriting, arrangements, and vocals are perfectly matched for every song, even on “Man/Bag of Sand”, a brief, deconstructed version of earlier track “Swim Until You Can’t See Land”. And yet the sameness of the album’s sound makes singling out one track from another difficult. For that reason, the boisterous energy of “Living in Colour” is refreshing as the penultimate song. The stomping rhythm (tambourine included) that opens the song never ceases, and the oft-repeated phrase “Living in colour / Liv-living in colour” is as close to jovial as you get on this record. Even if certain moments still bring the track back to the grim, the band is pushing the fun level to its highest point, and that’s a welcome release on an album that rarely lets you smile without making you cry first.

Still, I can’t fault the album for being too cohesive because it works. Hutchison’s voice is incapable of sounding anything but passionate and heartbroken with every note. The band fills every bit of sonic space with an aggression that teeters on too much without crossing the line. The production is polished enough to save the band from sounding like cliché indie rockers, but it doesn’t rob the music of its rough edges. On “The Wrestle”, each instrument sounds as if it’s coming from a separate corner of a cavernous room, uniting on occasion for a clear refrain. It’s a subtle effect that makes the song interesting rather than just pleasant.

Although The Winter of Mixed Drinks lacks the irresistible charm of its predecessor’s “The Modern Leper” and “Keep Yourself Warm”, it delivers the same accessible hybrid of lo-fi and folk rock.  Because Hutchison and company fail to push themselves to new territory, the album comes off as a comfortable sequel rather than a progression. If you’re a band that knows what formula works, maybe playing it safe without phoning it in isn’t a bad move. As a listener, you still get an excellent album that sits nicely alongside the rest of the band’s catalog. Yet another win/win for Frightened Rabbit and its audience.