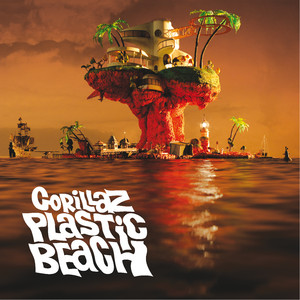 “The revolution will be televised,” Snoop Dogg informs us within the first two minutes of Plastic Beach, the third and final album from Damon Albarn and Jamie Hewlett’s creative masterpiece, the Gorillaz. The Gorillaz revolution certainly was indeed televised at first. They have always had a distinct animated style that set the aesthetic to numerous music videos with bizarre premises and very different song styles. But, the music video art form is almost dead to the televised world, and still, the Gorillaz have managed to stay on top of the popular music scene. Albarn still knows how to write amazing songs and pull in collaborators that span the vast scope of sound and Hewlett still knows how to create perfect images to accompany the song and cryptic storyline behind the band.

However, it’s hard to discuss one entity of the Gorillaz without discussing the other, as the cartoon band’s story is just as important. From what I can gather from the trailers, Murdoc Niccals has kidnapped 2D and taken him to the Plastic Beach. He does this by knocking him out with sleeping gas and stuffing him into a suitcase. Russell, the clever and large drummer that he is, dives after the boat and swims off to the beach as well. So now, the Gorillaz are hanging out on what looks like the coolest Play Mobile set of an island I have ever seen and have created a record that is just as amazing as the previous two. Welcome to the world of the Plastic Beach.

Snoop Dogg joins the gang on “Welcome to the World of the Plastic Beach”, the laid back, horn ridden, and true opener to this record (“Orchestral Intro” is track one). The beat is reminiscent of Doggfather-era Snoop and his rhymes flow with the smooth eloquence his fans are accustomed to. “Kids gather around/I need your focus/I know it seems like the world is so hopeless,” Snoop says in a dark set of lyrics which clearly go along with Albarn’s (or Niccals’s) view on the world at large. “White Flag” is a classy number with instrumentation by the Lebanese National Orchestra for Oriental Arabic Music and raps from Kano and Bashy. The song opens with a wonderful flute loop, accompanied by a group of strings before a catchy keyboard riff and drum beat play as Kano and Bashy rap. At the song’s ending though, the classical music returns along with the drumbeats creating a soothing finale.

“Rhinestone Eyes” is by far one of the best achievements on the album. Damon’s (or 2D’s) vocals are perfect, with that slow drawl he achieved almost a decade ago with the chorus of “Clint Eastwood”. “Rain is falling like rhinestones from the sky,” sounds beautiful as this intricately constructed song rages on making anybody listening yearning to dance. By now, anybody who is reading this article has probably heard “Stylo”, the first single from the album featuring a harsh-tongued verse from Mos Def and a crooning, yet velvety finale from Bobby Womack, who apparently was told to sing anything that was on his mind. The result is a diabolical first single that will surely win over the masses. As the years go on, the Gorillaz pop sensibility never ceases to amaze me.

“Superfast Jellyfish” features the return of De La Soul, as well as adding Gruff Rhys to the mix. The raps are so crisp and fresh, talking about instant breakfasts, mom’s recipes and to polish it off is one of the Gorillaz’ most fly chorus lines of their career. “Empire Ants” is a tropical number that whisks you away to the Plastic Beach, allowing you to maybe get the idea that the Gorillaz might be enjoying themselves on this mysterious island, much like the characters on Lost should be enjoying themselves (I still don’t get why they’re trying to save the world, just hang out on the beach, dammit). Halfway through though, the song turns into a dance beat straight out of the ’80s (reminiscent of Thriller-era MJ).

Lou Reed guests on “Some Kind of Nature”, which makes total sense given the melody of the song, its instrumentation, and its bizarre aesthetic that recalls early Velvet Underground. It’s strange to consider that the Velvets still have such an impact on (popular) music 40 years after their debut. Reed’s vocals are a perfect match and it’s interesting to hear a cartoon band state, “All we are, is dust” (they’re paper, or an After Effects file). “On Melancholy Hill” sounds like something right off of The Beatles’ Magical Mystery Tour, if only it had come out in 1987. A beautiful set of synth lines carry Damon’s lulling voice as he sings about plastic trees on melancholy hills. Is that enough of an amazing equation?

Speaking of amazing, the title track takes the cake, as remaining Clash members Mick Jones and Paul Simonon join in on the fun. The surf style guitars at the beginning, the keyboards throughout the main song, and Albarn’s distorted voice make this one of the standout songs on the record. And the album ends with two short gems that make you just want to start the album over again. “Cloud of Unknowing”, a heavenly number with organs and the voice of Bobby Womack lulling you to sleep in a fashion reminiscent of Pink Floyd in the late ’70s, and the rousing finale, “Pirate Jet”. This upbeat, jazzy number calls out the curtains on a triumphant note, proving that the Gorillaz have created yet another masterpiece.

Comparing the Gorillaz to Pink Floyd seems a bit over-the-top. This exact comparison is drawn in the documentary Bananaz, to which Albarn responds, “Well, no offense to Pink Floyd, but we’ve got tunes/toons.” His comment draws more attention than that shitty comparison. If he’s using tunes in the sense of music, he’s absolutely right. The Gorillaz have some of the best pop sensibility of this time period, even though their songs are intellectually superior to all of pop radio. On top of that, they are always able to pull influences from all over music and from their personal collection (e.g. The Clash, Lou Reed, Sean Ryder, Dennis Hopper, etc.). And if he means cartoons, he’s right again. When looking back, kids will ask us what the deal with the Gorillaz was and why they were so cool? Why? Curiosity, that’s why. Albarn and Hewlett have kept everybody curious about the Gorillaz for 10 years with their album’s secrecy, unique storytelling, and distinct visual style. This is why they are able to flourish and produce amazing records. They have kept everything mysterious, while the rest of the music industry insisted on putting things out in the open. This is why they are awesome, this is why they are important, and this is why they’ll be remembered another decade from now.