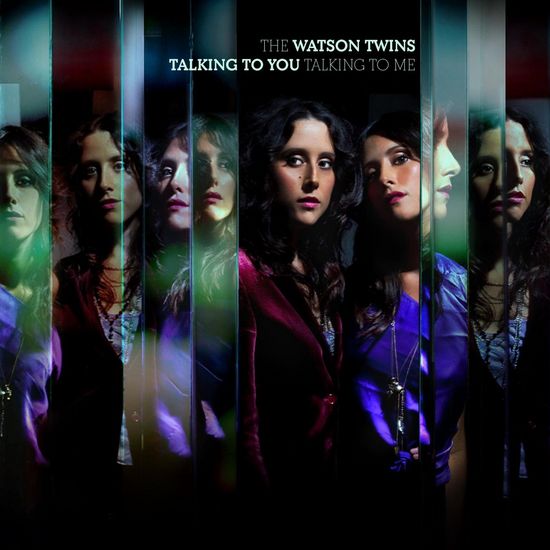 With musicians like The Watson Twins, it’s easy to forget how young they are. After listening to one of their records, it feels like they’ve been recording for decades, not just four years, but that’s just what timelessness sounds like. The sisters are all grown up now on their third solo LP, Talking to You Talking to Me, adding much needed life to a sound that seemed to struggle slightly to fully grab the attention they deserved. A few years after Jenny Lewis discovered these southern angels, they seem to have finally come into their own. Ms. Lewis must be so proud.

When they burst onto the scene with Lewis’ 2006 debut, Rabbit Fur Coat, they did so in a very fortunate way. With seasoned musicians at the helm, all they had to do was open up those fresh pipes and let out the goods, but that still left them in the background. When it came time for their own debut, they stuck to their southern comfort zone and ended up with a record that didn’t quite have the grip needed to make the huge splash they deserved. Even on the second time around, they seemed to be searching for their own identity, working to separate from the Lewis back-up band credit, and the subsequent record showed it.

With time, things changed, and the twins seem ready now more than ever to show us what they’re made of. The record opens with something familiar, a tapping drum beat and a brighter version of what was “Modern Man”.  When the keys of “Harpeth River” hit next, however, the sisters’ newer, sultrier side is introduced. The Zero 7-inspired number is stylish and crisp with guitars working over those ominous and hypnotizing keys.

As for the writing, they have a real knack for clever and biting lyrics, with the brilliant blues of “Midnight” delivering classic lines: “Careful what you wish for/I know the score”. Further down the line, “Devil In You” slaps you with, “Well the devil in you tried to tell me what to do/I don’t think so”, taking you into darker places. Words like those show just how revealing this record can be, and just how brilliant these girls are at writing such straight to the core words with more than fitting music to back it up. The first mentioned doing so with gritty guitars and gospel keys; it’s really the only way to sing of paying the piper. The quiet and longing strums of “Snow Canyons” help them take emotion out of your hands and into theirs, and that’s not something that’s easy to do.

Not all is dark and brooding, however. The Twins spread out much more on this record, touching on their alt-country roots for “Brave One”, and venturing all over the south expanding on what they call the blues with indie rock highlights. The bouncy steady pop rock of “U-N-Me” gives flashbacks to the days with Lewis, and when they hit that chorus at the end, a little Patty Griffin comes out to play. It’s a final track that leaves a lasting impression, and one that gives a fresh start for these girls.

They were shy when they started, but anyone who listened knew that there had to be something bigger and better for The Watson Twins. Talking to You is the step up that moves the sisters from indie rock back-up singers to brilliant singer/songwriters to relish. It’s an album of questions, trials, and timeless Kentucky wit that leaves you breathless at its best moments, and smiling everywhere in between. From the sounds of it, growing up isn’t so bad after all.