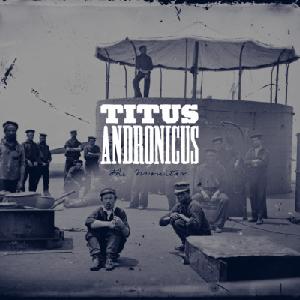 Somebody alert the Hype Police, because I’m starting a fire: The Monitor is the best album I have heard in a long time. In between recitations of famous quotes and speeches comes music that either smashes you in the face with an unopened beer bottle or guides you and your loved one in a slow dance at a bar about to close. There may be louder albums in 2010, and there may be instruments played at greater speeds in 2010, but it’s unlikely they will match the furious passion that Titus Andronicus puts into The Monitor.

At what point shall we expect the approach of danger? By what means shall we fortify against it? Shall we expect some trans-Atlantic military giant to step the ocean and crush us in a blow? Never. All the armies of Europe, Asia, and Africa combined could not, by force, take a drink from the Ohio or make a track on the Blue Ridge in a trial of a thousand years. If destruction be our lot, we ourselves must be the authors and finishers. As a nation of free men, we must live through all times, or die by suicide.

And with the words of Lincoln, The Monitor begins, and it is the words of integral characters during the period of The Civil War that set the mood for the record. However, it should be noted that though the war is alluded to and quotes are recited throughout, it serves the role of a theme more than a straight-up concept ala The Wall, or, more recently, The Hazards of Love. We don’t need a playbill, per se, to fully enjoy each song on its own (that isn’t a knock on the concept album, for I love the aforementioned albums).

Titus Andronicus could not have chosen a more perfect opener than “A More Perfect Union”. With drummer Eric Harm pounding the pathway for Patrick Stickles lyrics, the party is underway. Stickles is blessed with the same vocal chords possessed by Paul Westerberg, and doesn’t hold back. The guitar solos sound like something J. Mascis would come up with in his finest hours with Dinosaur Jr. There are nods on “Perfect Union” to Billy Bragg, but instead of not looking for a new England, Stickles isn’t looking for a new New Jersey. The band continues with a nod to The Boss himself with a play on “Born to Run” directly after.

Not every song on The Monitor goes past the five-minute mark. The band begins its battle with Los Campesinos! for “best song titles on a 2010 album” with track two: “Titus Andronicus Forever”. It’s a short punk-piece, with a paranoid choir screaming “The enemy is everywhere! The enemy is everywhere!” Turmoil and mistrust run rampant throughout the record, but its very core is found here. The sentiment is reprised in “…And Ever”, complete with ragtime piano and a sax solo straight out of The Rocky Horror Picture Show, but it works!

If you see Titus Andronicus live this year, you’ll more than likely be singing along ‘til your voice gives out. Whether it’s the climax of “No Future Part Three: Escape from No Future”, with its accusation, “You will always be a loser,” or the insistence of “It’s us against them” in “Four Score and Seven”, Stickles seems to demand audience participation.

The band sounds like they’re having the time of their life with the honky-tonk track, “Theme from ‘Cheers’”. With the aid of Amy Klein’s violins, and Harm contributing a verse of his own, you can almost see the band trying to keep it together without cracking up. “Let’s get fucked up, and let’s pretend we’re all okay,” is the motto of this bar-song sing-a-long. Things speed up again at the song’s conclusion, which transition beautifully into the “ballad” of the album.

“To Old Friends and New” sounds like a track off of a Hold Steady greatest hits collection. (Craig Finn is one of the guest speakers on the record.) It’s an old fashioned boy/girl duet that believes “It’s all right, the way that you live.” With the accompanying piano, you’ll believe every word these kids do. Like every other song on The Monitor, it earns its lengthy runtime. Finally, the album concludes with the epic “The Battle of Hampton Roads”, a song made-up of about 78,000 different parts that culminate in a musical explosion. This will be the most interesting of all the songs to see the band perform live. It isn’t that the structure is complex; it’s just…so…fast.

As for the lyrics, there seem to be more words from start-to-finish on The Monitor than on a Twista album. I can’t even begin to scratch the surface of how impressive a lyricist Stickles is, but this effort cements his place in classic modern songwriters today, proving that Titus Andronicus is, indeed, the “real deal.” The Monitor is destined for a spot in my year-end top 10, and should serve as a challenge for up-and-coming artists and current superstars to really pour everything they have into their music.