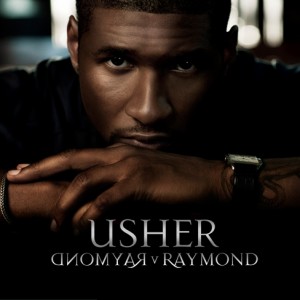 Usher Raymond.  His dance moves mirror Michael Jackson, his movie talent mirrors Mariah Carey, and as he ages, his vocals become less and less distinguishable from R&B headline R Kelly. This kid had all the right moves for years, everything between the “Bump & Grind” equivalent “Nice & Slow”, the infectious personal favorite of mine “My Way”, to his Lil’ Jon/Luda collaboration “Yeah”. Unfortunately, when it comes to anything beyond that ridiculously catchy string of successes and a recent MJ tribute at the 2010 Grammy Awards, Usher is not in prime form here on Raymond Vs Raymond — in fact, had one given this a listen prior to R Kelly’s Untitled, I’d have been hard pressed to catch the difference through a handful of tracks (aside from Usher’s lack of use in the Auto-Tune department). There really is nothing to glean here in singles or otherwise as everything blurs together, but as an album it deserves at least some semblance of observation.

Truthfully, every genre has its share of acts that sound similar or even exactly the same, whether it’s because like influences spread amongst them, signatures of said genre become overplayed (“the it thing”), or originality goes out the window. As there are only so many ways to throw in massive vocabulary to build a proper indie tune, there are only so many ways to say “I wanna sex you up” or “I’m older now, let me be.” Where is the solution to this? Marketing, packaging, live performance, technical proficiency, prowess, fanbase: These things define artists when two or more sound alike, so with that in mind, let us look at Usher Raymond from his sheer presence alone.

Usher is plainly and simply himself, period. Unlike many pop stars of the day, he moved past his urge to expand outside of R&B and just stuck to what he was good at: crooning and performance. Usher is undeniably a very charismatic artist and always aims to please his core demographics and then some; you rarely see him in tabloids, you rarely take him as less than an authentic talent, and unlike some celebrities with scandals abound, you never really wish to punch him in the groin. Raymond Vs Raymond is about as generic as an R&B male vocalist record can be right now without resorting to constant sex references (which in itself is refreshing), but at the same time it will probably function as a success in its receiving audience due strictly to Usher’s straightforward persona — not via quality of record.

To be fair, Raymond Vs Raymond is not that bad of an album in its own context; if you isolate songs such as the faster paced “Rock Band” (sorely misnamed as it might be), the major single “Hey Daddy (Daddy’s Home)”, and the more seriously minded “Secret Garden” or “At The Time”, you have the essentials of both a party record and one of introspection, a tie-in that is rare in R&B when it comes to believability. The listener can truly sense that Usher Raymond is becoming more mature in his own way, and that, my friends, is what makes this album worth buying, if you are a fan of Usher or R&B in general (others really won’t see the progression as naturally in my opinion). The catch is that if you dissect this album into pieces, it goes all over the place to try and please everyone while also allowing itself to get lost in blandness and boredom. Maybe this is due to the simple beat structures and loops used, but in all honesty, some of the best rappers and crooners can make a simple beat sound like pure gold if they dedicate enough time to the song, and one gets the impression here that Usher or his production team might have gotten lazy.

Raymond Vs Raymond feels like the entrails of Confessions. Without the hits to attach it to the mainstream, it feels a little too slow and a little too nonchalant. Again, it is not an all-around bad recording, but rather sleepily drones on at times (“Cruisin”) — and this coming from an artist known for his youthful energy. This is not a signature work, and in that light, it will probably drift away from the pack. But on the bright side, it certainly does not embrace so many stereotypes and trendy fillers that it sinks completely. Raymond Vs Raymond does showcase Usher’s matured vocals quite a bit also (“Papers”, “There Goes My Baby”), though you can only hear different variations of “ooooo” to a certain degree before you skip the song.