We Are Wolves – Invisible Violence 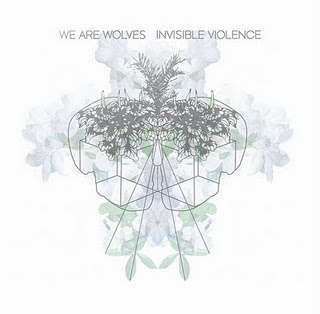 They claim to be wolves. This is relatively accurate in terms of the Quebec indie-rockers’ sound as it is indeed ferocious and diabolical (like the type of words one might use to describe a wolf, other than cunning). We Are Wolves have certainly made quite an aggressive third album, with tight sounding guitar (bass?) reminiscent of 80’s punk, keyboards of the NES style (preferably Legend of Zelda), and vocals that sound like a hypothetical alternate world where Ozzy sings for TV on the Radio. This Montreal-based trio has definitely developed a more distinct style on Invisible Violence, making it a gnarly, indie shredder for you to show your friends and possibly gain some hipster street cred.

We Are Wolves gnash their teeth at first with a catchy and uniquely structured tune called “Paloma.” The guitar riff kicks ass, making any listener want to ride a motorcycle and look tough, while the lyrics describe spotting a beautiful girl within a crowd. Halfway through though, these Canadians start speaking perfect Spanish, providing a level of lyrical, buttery goodness that is quite soothing over this sinister tune the band has got going on. Overall, this hypothetical disc is off to a good start. The band takes it to the next level (as opposed to the first one) by rocking a song called “Holding Hands”. And no, they don’t want to hold them the way John Lennon sang about. With a guitar riff reminiscent of the Misfits “Bullet”, and a sports arena drumbeat, the singer croons over a fast paced tune that could easily get a crowd of young rockers to mosh ferociously.

Halfway through the album is “Golden Hands,” which clearly has to be addressing the keyboardist who is creating 70’s style Atari riffs that are just straight up fun. But there are so many different stylistics of keyboard within the song. There are the aforementioned videogame-esque loops, ambient keyboards to sooth the soul, and synth riffs bringing you back to memories of psychedelic euphoria. To finalize the five minutes of awesome, they end on a raw guitar note, only to fade into an explosive and quick pulsed song called, “Wire.” The slamming of chords and punchy lyrics make me feel a cramp coming on already just imagining how much I would pogo to this song if in a large crowd (or just at a small party).

“Rue Oblique” is a well-spoken French number (I don’t speak French, but it sounds cool to me) played over more airy keyboards and a slower tempo spacey instrumentation. Towards the end, the drums build up over a course of a good two minutes as the keyboard riff sends you out into the farthest reaches of the galaxy. And finally there is “Summertime,” the catchy and upbeat tune that makes me want it to be summertime right now. The band speaks of dancing, walking by the sea, and basically doing anything they can do to get some summer romance. After all, that’s what every summer is about anyways. The album fades into a short finale piece called “Bounty Waterfalls”, which is merely an electronic jam of synth and programmed drums, but it adds a soothing, peaceful touch that lets you know We Are Wolves are lying down for awhile.

These guys are apparently big in Canada, which is just as cool as being big in Japan, or being big anywhere. The point of being in a band is to rock with what you got, and these guys got style. It’s definitely a combo of previous heard styles, but when mixed up together, you get this new and intricate musical entity that can blow minds worldwide. We Are Wolves is apparently barking up the right tree because if they’re still developing this rad sound while selling out shows in Canada, it’s only a matter of time before they take a bite out of rock ‘n’ roll as we know it.