On Second Listen: Editors – In This Light And On This Evening 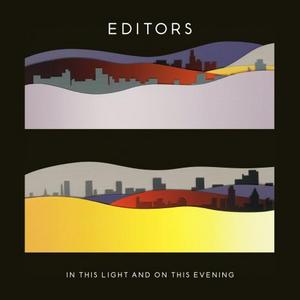 Okay, so were the Eighties really that great that bands continually want to take you back there? I had high hopes of Editors from their early days. The 2005 debut, The Back Room, was packed with strong tunes and storming riffs. Live, the band had a real presence and looked set to carve out a big name for itself in mainstream indie. Would they one day go on to reinvent prog rock, you dared to wonder! Second album syndrome was quickly banished when their follow up, An End Has A Start, introduced a bigger, more textured sound. It was a UK number 1 album and broke the band worldwide. Personally I found it a little less convincing than their debut but you can’t knock those sales figures and it did open with the epic “Smokers”.

Since then, bassist, Russell Leech, and guitarist, Chris Urbanowicz, have traded Birmingham, England for NYC, leaving drummer, Ed Lay, and singer, guitarist and new dad, Tom Smith, back home in Blighty. The band met up in London in early 2009 to record album number three. In This Light And On This Evening, the new offering from Editors, represents a change in direction of sorts but whether it’s warranted, I’m not that sure. Producer, Mark Ellis aka Flood, has a huge pedigree, which goes back to the early eighties when he engineered synth pioneers like New Order and Soft Cell. As an engineer, producer and co-producer, Flood has been busy, busy for over 30 years and his biog reads like a rock Who’s Who.

It all augured well but, truth be told, for all the boldness, there’s nothing here as uplifting as the band’s earlier work. No hit you between the eyeballs “Bullets” or the anthemic sweep of a “Smokers Outside The Hospital Doors” to inhale. The title track gets proceedings underway yet it’s all a bit dull and earnest. The album is dominated by synths and the mechanical repetition becomes a bit tedious at times, evidenced by song two, “Bricks and Mortar”. At 6:18 it has its moments but overstays the welcome. First thoughts on next up, “Papillon”, are that if I wanted a Depeche Mode album, I can always buy one. The song has a catchy, insistent synth riff, Ã  la 80’s Electric Friend, Gary Numan, which does grab you, but for how long?

Comparisons are often drawn between Editors and Joy Division. The latter were arguably the first genuinely post-punk British band and have exerted a massive influence on a number of bands, who followed their melancholic path. Joy Division produced two albums before singer Ian Curtis tragically took his own life and the remaining members became New Order. Comparisons with the Editors of In This Light are more accurately drawn with the likes of Depeche Mode, Numan and New Order, though band and producer work hard to give the record a Sci-Fi makeover and a contemporary twist. The problem is somewhere in the machinery, emotion is lost.

The bass n’ synth groove of “You Don’t Know Love” recalls New Order but despite an extended build it never hits the heights of its mentor’s work. Welcome changes are then rung for “The Big Exit” which has a sparser intro as dismembered guitar and drums are traded before we hit sustained guitar and synth overlays, which create a dark, atmospheric ambience. Smith at last exercises some vocal variety here and the song is arguably the most successful, if not an obvious contender. This neatly leads into “The Boxer” which opens softly with an over-familiar chord sequence that recalls the likes of Japan. Charting the feelings of a fighter as he reaches the end of the road, lyrically this is more telling than much of the more obscure, gloomy stuff on the record.

After the interesting diversions of the last two songs, “Like Treasure” picks up the pace again but the orchestral strings are a bit too formulaic here. The graphically titled and gratuitously robotic “Eat Raw Meat = Blood Drool” follows and, while adventurous as a soundscape, doesn’t really cut it as a song. It has some of the most annoying machine-like synth sounds on it too. “Walk The Fleet Road” is an atmospheric slow-builder which shows another dimension to a band that clearly wants to demonstrate change. The song makes up the ninth and final album track, although the US release of the physical album on Jan 19th will also include some bonus tracks.

Lead singer, Tom Smith, has always struck me a bit of a one-trick pony vocally. He sounds like too many people to list here and a bit more variety in intonation would be a good thing. You don’t get much in that direction, other than perhaps on “The Big Exit” and the final track. Sacrilegious as it may sound to fans, a female voice in there, now and again, would really lift the proceedings. Musically and lyrically, Smith contributes a great deal to the band’s sound, style and repertoire. His lyrics are openly ambiguous and work best when descriptive of London, Tom Smith’s home town, in an affectionate, yet at times brutal, homage.

This could be the album Editors needed to make to get a guitar-dominated past out of their system. Maybe by album four, they will have exorcised the synth excesses too. I hope so because the band still have a lot to offer, not least as an outfit who might find prog rock one day.