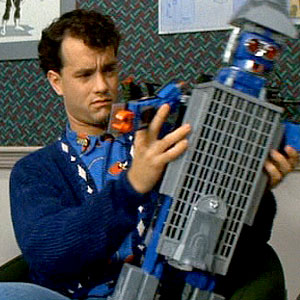 Who doesn’t love Tom Hanks? He knows how to make us laugh, make us cry, and to top it all off, he’s best pals with Conan O’Brien. (Um, he coined “Coco”, if you didn’t know that, already.) When he’s not making box office gold — 2007’s Charlie Wilson’s War is the best political comedy since 2000’s Traffic — he’s usually producing. He’s responsible for HBO’s legendary Band of Brothers series, and its recent equivalent, The Pacific, in addition to a series of films off his Playtone production company. Now, he’s turning to Broadway…

As Deadline New York reports, “talks are underway with Playtone partners Tom Hanks and Gary Goetzman to turn the [American Idiot musical] into a feature film.” Green Day should only be so proud, as Hanks means top business. But given that the 2004 comeback record snagged Grammys and stormed the charts, and the play is pegged to do just the same on Broadway, it’s only natural that the man-formerly-known-as-Joshua-Baskin would want his hands on it. In fact, call it an early projection, but we’re willing to bet that this thing will be quite exceptional. Sigh, chalk this up to another accomplishment for the trio.

If you didn’t know, American Idiot opens on Broadway April 20th. Get your tickets… now.